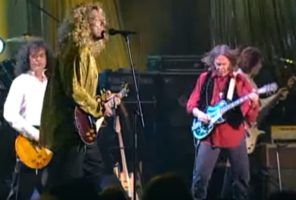 When Led Zeppelin were inducted into the Rock and Roll Hall of Fame in 1995, they got on stage with fellow Rock Hall inductee Neil Young and performed a new arrangement of “When the Levee Breaks,” a classic Led Zeppelin IV track.

You can relive the, um, magic by watching the top video below.

Because Jimmy Page’s Les Paul and Young’s Les Paul weren’t quite enough, vocalist Robert Plant grabs a Les Paul of his own at the 2:00 mark. You can watch him truly go to town on his Gibson at 4:36 as Page looks on.

Page and Plant were in full-on Page & Plant mode at this time; in fact, they’d just released a successful live album called No Quarter, which was packed with Led Zep tunes. However, they didn’t ask the other surviving Led Zep member, John Paul Jones, to take part in the project.

That’s why Jones—during the band’s now-legendary Rock and Roll Hall of Fame acceptance speech, which you can watch in the bottom video—says, “Thank you, my friends, for finally remembering my phone number” (jump to 6:31).

David Lee Roth: “I don’t know that Eddie Van Halen is going to rally for the rigors of the road again”