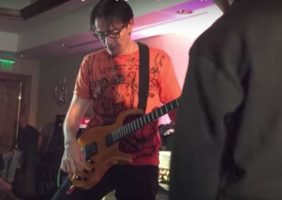 Warning: There’s nothing newsy or earth-shattering about this story; it’s just a little something posted by a guitar geek for other guitar geeks. You’ve been warned!

An interesting new clip turned up on YouTube awhile back; it shows someone handing Steve Vai a Parker Fly guitar at the 2015 Vai Academy in Vail, Colorado.

“Steve was waiting for his tech to find his [Ibanez] EVO,” writes guitarist Francisco Tomás (the owner of the guitar and the video) on YouTube. “Meanwhile I offered him [my guitar]. I know you were fighting to play it and struggling with the tuning, Steve!”

Actually, Vai wasn’t all that into the idea at first. He even says “I’ll pass” and removes the guitar before the audience groans and he changes his mind.

You also can see Tomás giving Vai a few Parker Fly pointers in the clip—followed by Vai telling the audience, “You’ll get to see me fumble.” You’ll have to watch the video to see if he actually fumbles.