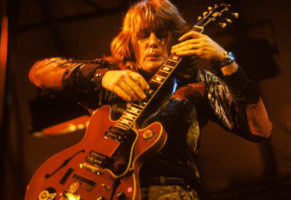 From a guitarist’s perspective, the 1970 Woodstock film, which documents the highs and lows of the August 1969 Woodstock Festival, has several highlights. There’s Jimi Hendrix’s immortal take on “The Star-Spangled Banner,” a mesmerizing performance by newcomers Santana, Richie Havens’ thumb-fretting madness and Pete Townshend’s Gibson SG acrobatics with the Who.

But for a full-on blues-rocking experience, there’s no beating Ten Years After’s adrenaline-fueled reading of “I’m Going Home.” The performance, an intense nod to vintage blues and Fifties rock and roll, featured the lightning-fast fretwork of Ten Years After frontman Alvin Lee.

“The solo on the movie sounds pretty rough to me these days,” Lee told me not long before his death in 2013. “But it had the energy, and that was what Ten Years After were all about at the time.” The performance made instant stars out of the British band, which led to more big-name festivals, a label change and their biggest hit, 1971’s “I’d Love to Change the World.”

During my interview—which was tied into Lee’s new studio album at the time—I couldn’t help but steer things toward “I’m Going Home.” By the way, Lee’s guitar solo starts at 5:29 in the video below.

The first time I saw the Woodstock film, I was completely knocked out by Ten Years After’s performance of “I’m Going Home.” It is, without a doubt, one of the movie’s true guitar highlights. I remember thinking I’d never seen a blues/rock guitarist play that fast before, at least not a guitarist in 1969. Where the hell did that come from?

You’re obviously a man of very good taste! Seriously, though, I never really tried to play fast. It kind of developed from the adrenalin rush of the hundreds of gigs I did long before Woodstock. They called me “Captain Speedfingers” and such, but I didn’t take it seriously. There were many guitarists faster than me—Django Reinhardt, Barney Kessel, John McLaughlin and Joe Pass to name a few.

The solo in the movie sounds pretty rough to me these days, but it had the energy, and that was what Ten Years After were all about at the time. However, I often wonder what would have happened if they had used “I Can’t Keep From Crying, Sometimes” in the movie instead of “I’m Going Home.”

Did you admire the other great fast bluesman of the time, Johnny Winter?

Strangely enough, I wasn’t into fast guitarists. I preferred Peter Green’s subtle touch. I saw him with John Mayall’s Bluesbreakers at the Marquee Club in London and was very impressed. He was the only guitarist I’ve ever seen to turn the volume control on his guitar down during a solo.

What kind of delay/reverb, amp and overdrive did you use on the solo on “I’d Love to Change the World”?

As far as I remember, it was a Wem Dominator used as a pre-amp into the old Marshalls. I had the Wem 15-Watt power amp padded down to guitar input level. The echo was an EMT plate.