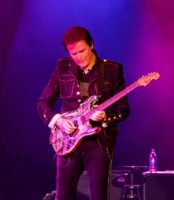 As reported here, prog-rock legends Yes were inducted into the Rock and Roll Hall of Fame last week.

The event boasted performances by past and present members of the band, including co-founding vocalist Jon Anderson (who joined the band on stage for the first time in 13 years), former Yes guitarist Trevor Rabin and former Yes keyboard player Rick Wakeman—all of whom shared the stage with current Yes members Steve Howe and Alan White (not to mention Rush’s Geddy Lee).

And now there’s this:

Anderson, Rabin and Wakeman have announced that, effective immediately, they will be known as Yes Featuring Jon Anderson, Trevor Rabin, Rick Wakeman. They’ve also announced a North American tour that’ll kick off in August (check out all the dates below).

When the trio toured last year, they used their last names as their official band name. Not anymore.

“It’s very simple,” Anderson says. “The fans want it, we want it and it’s our right to use the name. Yes music is in our DNA.”

According to a press release, the trio also will record new material throughout the summer for a projected 2018 release. Plans also are in the works for a new DVD that was shot at the final UK show of Anderson, Rabin and Wakeman’s recent European tour.

How do current Yes members Howe, White, Geoff Downes, Billy Sherwood and Jon Davison feel about all this? We have no idea. They’ll also be touring this year, also starting in August.

Yes was co-founded in 1968 by Anderson and bassist Chris Squire, who died in 2015. While Wakeman is mostly associated with the Seventies “prog era” of the band, and Rabin is associated with the band’s Eighties “pop era,” Anderson is the bridge between the two. Other touring band members include Lee Pomeroy on bass and Louis Molino III on drums.

For an article that lists all the past (and present) members of Yes—and that might hopefully clear up a few things—head here.