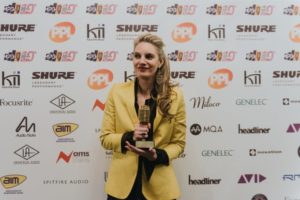 Next year’s ceremony will take place on February 28 at Grosvenor House in London.

Initial details for the 2019 MPG Awards have been announced, with the annual bash set to take place on February 28 at London’s Grosvenor House.

This year’s host, 6 Music presenter Shaun Keaveny, will preside over proceedings once again, as the event moves into its 11 year.

The 2018 MPG Awards marked the 10 anniversary of the event, which saw The Big Moon, The Amazons and The Wombats producer Catherine Marks scoop the coveted Producer Of The Year Award, while Clive Langer and Alan Winstanley were honoured with the PPL-sponsored Award for Outstanding Contribution to UK Music.

You can view the full list of 2018 winners here.

Click the following links for in-depth PSNEurope interviews with Marks and Salogni.

You can also listen to their PSNEurope Women in Audio Podcasts interviews here, in which they discuss their route into the pro audio industry and the measures that must be taken to make it a more inclusive and diverse workplace.