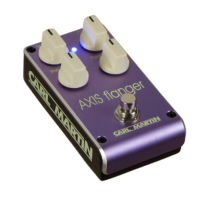 What’s more groovy than a flanger?  A new, smaller flanger, loaded with features and painted a bold psychedelic purple….that’s what!

Complete with a buffered Bypass footswitch for on and off control (indicated by an LED), Speed, Depth, Pre-delay and Feedback controls, the Axis Flanger comes in a machined aluminum case finished in psychedelic purple, and those cool Carl Martin graphics. The Axis Flanger  must be powered by a regulated 9v Power Supply like the Carl Martin DC Factory,  and like all the Carl Martin fx pedals, they use the best parts to make sure you get the best sound!