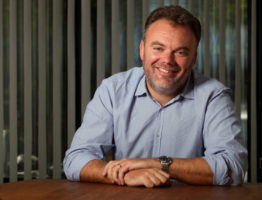 'Customers have no idea what we are… why should they?' Audiotonix CEO James Gordon explains the group's strategy

The Audiotonix website says it all. It consists solely of five logos. Underneath each one is a link to another website, the one that goes with the logo.

It’s a website that says: “Don’t hang around here. There’s nothing to see. Move on. Go about your business, and please close the door on your way out.” It’s a non website. I don’t know who charged for it, but the invoice had better not have exceeded a modest sum. Probably Minimalistwebsites-r-us. Dot com.

Which kind of begs the question: why is it there at all? Why is there a thing called Audiotonix, and why does that thing wish to be left undisturbed? There are, of course, many large and loud (sic) groupings of pro audio logos in all sorts of configurations. Some collect specimens, like the Natural History Museum. Others buy and sell like The Stock Exchange. Some of them do the audio equivalent of a barbecue (look up the origins of the French phrase de la barbe au cul and smile – the polite translation is ‘from head to toe’). In our terms it means a complementary chain of brands that starts at the microphone and goes with the signal all the way to the loudspeaker, ticking all the essential boxes along the way.

This one doesn’t do that. This one is comprised of leading names that all do the same thing, give or take. In alphabetical order it is: Allen & Heath; Calrec; Digico; DigiGrid; and Solid State Logic. OK, DigiGrid is the odd one out, and not just because it looks like half time in a game of Pac-Man. This is the interfacing and networking dimension, potentially the glue that binds all of the others together and a lot more besides. The rest, as if you didn’t know, are makers of mixing consoles.

Unusually in today’s corporatised globe, Audiotonix – as the website reveals – is not an end in itself. According to Audiotonix CEO James Gordon it was a means to protect Digico from its own success.

“Digico was becoming a sizeable business on its own,” he says, “and we as management were concerned, to be honest, that we might fall prey to the pattern of acquisition ourselves – which has not always been a positive experience for many brands. We wouldn’t want our culture and energy to be absorbed and dissipated the way it can be in some instances.

“If you grow quickly as a business, and emerge as an attractive target, you can either stick your head in the sand and pretend it will never happen – which can catch you out; or you can bolster your position. The cost of entry for any new product is a lot more than it used to be, mainly because the R&D effort just gets bigger and bigger, especially for digital technology – even more so if you want to innovate, as we do, rather than just keep up. Scale and expertise help you to do that, so making your own acquisitions begins to make sense.”

This logic would explain the need to acquire within your own skill base, and not to step outside your comfort zone in the pursuit of acquisition for its own sake.

“We know electronics and workflow,” continues Gordon, “so if we were to buy a business it would need to be one that we felt we could add value to and gain value from. It has to be beneficial both ways.”

When private equity trust Electra Partners announced its investment in Digico in August 2014, it already had interests in both Allen & Heath and Calrec making the formation of a new professional audio group the natural outcome of the manoeuvre. Livingbridge retained a minority stake in the deal, and James Gordon became CEO of the group alongside chairman Malcolm Miller, already chairman of both Allen & Heath and Calrec.

“When Electra presented the concept of a group including Allen & Heath and Calrec it made perfect sense,” Gordon reveals. “Although there is a crossover in what we do, it’s a ‘managed’ crossover in terms of brand positioning and customer relations. It meant that when we got the three heads of R&D together they all spoke the same language – faders, encoders, FPGAs, DSP chips – and this common knowledge leads to adding value very quickly around the group.”

Gordon recoils from any suggestion of adding electro-acoustic technology to the basket, professing “no interest in wood and cardboard”, but signal processing – DigiGrid sits in the middle, remember – is another matter. “That’s a definite possibility for the future,” he says, “along with other forms of electronics that I wouldn’t rule out. We know how to value premium brands, they sit well with us, and we understand customers’ expectations from them. All the brands in Audiotonix are extremely highly regarded.”

The latest addition to the group, Solid State Logic (SSL), seems not to plug a gap in the configuration. In broad terms the triad of Allen & Heath, Digico and Calrec completes a Venn diagram of market entry levels, industry sectors and brand equities that accounts for most criteria likely to demand the satisfaction of console users from DJs to national broadcasters, via Glyndebourne and Glastonbury. Where to place SSL on that diagram is less obvious, and prompts new questions about the role of Audiotonix.

Gordon is fond of automotive analogies, and places Audiotonix in something of a parallel universe to VAG (Volkswagen Group). This makes Allen & Heath the excellent, versatile and popular Audi; Digico the far-ranging and best-in-class Porsche; and Calrec the rarefied Bentley. SSL emerges as the Lamborghini, prompting immediate and inexcusably unfair speculation about which further acquisitions would bring Skoda into the fold.

In all seriousness, and notwithstanding the latter-day forages into live sound, SSL brings its unprecedented legacy of studio recording. “The broadcast products overlap with Calrec,” admits Gordon, “but if you look closely you soon see that broadcast is not just one market either. We’re getting involved with specialists in entertainment, sport, weather… one of our customers exclusively deals in the broadcast of live computer gaming, and of course the platforms are expanding like crazy on satellite, online, through Wi-Fi and other delivery to all kinds of devices and thousands of subscriber networks.

“On the live side, pretty much every rental company buys into more than one brand of mixing console. They may standardise on one PA – or maybe two – and that’s where you get more of a brand exclusivity. Some of the top Digico rental companies have invested in Allen & Heath for a different part of their market, and naturally that works perfectly for the group.”

The addition of SSL does add to the mounting swell of prestige. The rationale behind the move – “the support and resources of a larger group to help us achieve our aspirations”, in the words of SSL MD Antony David – is shared by all of the companies, forming a kind of guild that pools the twin values of common interest and safety in numbers. A group chief technology officer, Neil Hooper, acts as the conduit between the resolutely separate R&D departments of each company, not least because some pieces of technology simply need not be reinvented five times over.

“A good example is the SMPTE 2022 module required by Calrec,” says Gordon. “When that was being designed it was ensured that it could be ported easily to Digico and Allen & Heath desks – this was before SSL was in the group – and we’re doing some AES67 development at the moment that will be available to all the brands in the same way. We all have to do these interfacing options for the consoles, and it just makes sense to do such a basic job one time only.

“Neil has a background in mobile phones, with experience of touchscreens, ARM processors and so on – a lot of the stuff we all have to deal with. His role is to manage how the knowledge share is passed around, without interfering with individual design concepts of course. Right now, Allen & Heath is expanding its Dante connectivity and SSL has a lot of that expertise, so Neil has put the right people together to help that go as smoothly as possible. The R&D teams turn to him as a facilitator.”

Each of the five businesses is an independent centre of P&L with its own business plan, but if a brand needs or enters a concentrated phase of investment there is a discussion and Audiotonix invests. As CEO Gordon and his team are in a better position than anyone in The City to identify wise spending, such as the million or so directed towards Allen & Heath’s facility in Cornwall recently and the much anticipated Calrec Radio product launch at NAB this month. Audiotonix may be like an agency, or an enlightened bank, but it requires no branding of its own.

“It doesn’t matter what the market thinks of Audiotonix, it’s not there for that reason,” Gordon explains. “It’s a holding company, an enabling vehicle; it doesn’t appear on any product. What matters to the market is each individual brand, and I would wager that a large majority of the group’s customers have no idea what Audiotonix is. Why should they?”

Hence the website. But philosophers of a certain persuasion insist that the universe is ordered by an elusive and intelligent design, and didn’t just happen by chance. Sounds like Audiotonix to me.