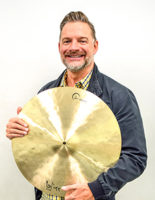 Ian West is a much sought-after session drummer as well a highly-respected and influential drum tutor and drum clinician. He has performed with artists such as ABC, 5ive and Atomic Kitten, and has delivered drum clinics alongside Dom Famularo, Gregg Bissonett and Liberty DeVitto. One of Ian’s achievements is being awarded the BBC Kenny Clare prize for Best Jazz Drum Performance in the U.K.

West End drummer and percussionist James Gorman has played extensively in a wide range of musical settings; most notably percussion for the U.K. and European tours of ‘Evita’, ‘Jesus Christ Superstar’ and the U.K. tour of ‘The Sound of Music’, and he is currently touring with ‘Evita’ once more.

Sophie Galpin is part of all-girl Rock group PINS and has toured nationally and internationally, playing major festivals such as South by South West, Glastonbury, and main stage at Reading and Leeds.

Finally, Steve Roberts is the drummer for The Tangent and also played for award-winning Prog band Magenta. Steve has played many different styles, from theatre shows, Jazz and Rock to full blown Progressive epics.