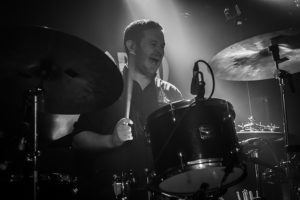 In addition to international touring, Stephen Leacock has performed at Glastonbury, Download, Sonisphere, T In The Park, SXSW and Pukkelpop. He has shared stages with Snow Patrol, Placebo, Biffy Clyro and Two Door Cinema Club, and has worked with top producers such as Gil Norton (Pixies), Pedro Ferreira (The Darkness) and Adrian Bushby (Foo Fighters, Muse).

Liam James Gray studied drums with the late Bob Armstrong and is currently touring with a host of acts, including the John Verity Band (Argent) and Never The Bride. Other notable names Liam has worked with include Kimberly Roo (Katrina And The Waves), Marc Eden (Mott The Hoople) and Dave O’List (The Nice).