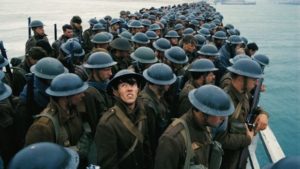 The Christopher Nolan film based on true events on the Dunkirk beaches in 1940 won the Best Sound Editing, Sound Mixing and Editing awards.

Rerecording mixer Gregg Landaker won his fourth Oscar (previous award wins include The Empire Strikes Back, Raiders of the Lost Ark and Speed).

Supervising sound editor and designer Richard King also picked up his fourth award, previously winning for The Dark Knight, Inception and Master and Commander: The Far Side of the World.

The Sound Editing and Mixing nominee categories were as follows:

The Shape of Water

The Shape of Water

Dunkirk also won an Oscar in the Film Editing category.