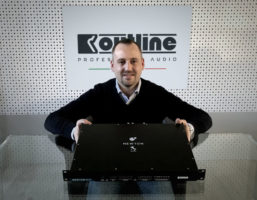 Exclusive: how Isaac Newton is the unlikely inspiration for Outline’s new audio processor

The habit continues of naming huge digital brains after pioneering Universe-botherers, and it’s a shame that an Italian company missed out on one in particular. But everyone in the UK is bursting with pride that Outline – the Brescia-based loudspeaker systems specialist – has chosen Sir Isaac Newton as the inspiration for its game-changing multi-source audio processor, management and control hub and networking platform.

The cornucopia of features in Newton can be discovered on the Outline stand at Prolight+Sound in Frankfurt this month, after months of beta-testing, such as Justin Bieber’s European tour with Capital Sound last year. Now the 1U rackmount box of tricks is on the open market and Outline has joined the elite band of global speaker manufacturers with an option in the kind of processing that would make Sir Isaac drop his quill.

Such is the importance of DSP in today’s digitally transported lorry-loads that Outline secured the services, about 18 months ago, of an experienced freelance consultant in these matters: Argentinian-born Fernando Rey Mendez, who came to Italy aged 16 and established himself as an audio engineer in recording and live sound before specialising in DSP programming, design and operation for pro audio.

One thing Newton had to overcome was the issue of format conversion and protocol navigation, as Mendez explains. “Newton supports five different protocols,” he says, “including analogue, Dante, MADI coaxial, MADI optical and AES3. Each input has a dedicated asynchronous sample rate converter, so regardless of domain they can all be used to feed the processing channels and Newton’s complex clock management and distribution. The user sets up the strategy via our Dashboard software for and then has complete control over every input signal, clock source or power supply change – with the benefit of a unique Failsafe feature.”

Patent-pending filter technology claims to be the first use in pro audio of warped finite impulse response (WFIR) filters – “a huge step forward from FIR,” Mendez says. “They bring filtering to a resolution and quality not possible before, and make it possible to use an unlimited number of filters. Moreover, Newton uses them to synthesize the most powerful raised cosine filters available. When you add this to our FPGA topology, you can see what a breakthrough it is.”

The FPGA paradigm, already established across many sectors of pro audio, invites a future of upgradeability with almost limitless potential. Newton, already crammed with processing features, has room for even more. “The benefits of FPGA are enormous,” confirms Mendez, “and one of the biggest is the opportunity to re-configure Newton with a simple software update. We can add or alter the feature set according to market needs as they change over time.”

This would be the envelope for such fancies as 360 audio algorithms, should that type of demand build such a head of steam that Outline would respond, but there are many others. In fact, Newton has the potential to supply almost everything that a system might need. “If you consider the point about FPGA,” Mendez reflects, “and the capacity for five different protocols, 14 different clock sources, the matrix mixer, the number of routing capabilities, the advantages of the WFIR technology and the high number of available inputs and outputs… to me, it’s hard to think of an application that could not be set up with the Newton. It makes Newton a very profitable investment for any company.”

The largest version of Newton – the 16+8 – offers 216 hardware inputs in both directions, and more units can be daisy-chained to double this capacity. Making the most of its transport flexibility, it’s only natural that Newton is agnostic when it comes to any existing or future inventory – as Mendez acknowledges.

“Newton can be used with any loudspeaker or console brand,” he says. “It makes Newton an essential tool in festivals, multi-console applications and all complex digital signal distribution landscapes where different signals and clocks have to be used and where tough strategies are mandatory.”

If that sounds like a definition of universal, so it should. The name was suggested by an American consultant well versed in Outline’s technical agility, with the aim of identifying a product that could solve complex problems with the same unyielding sagacity as the great man himself. No doubt, with Outline’s help, the very Music of the Spheres will ring true.