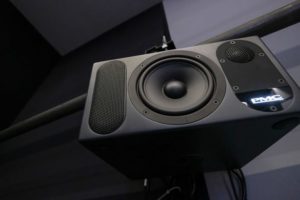 Ibiza studio to focus on immersive sound powered by PMC

Pro Audio Ibiza supplied PMC speakers to the new audio facility in Playa d’en Bossa, which has been specifically designed as a creative hub for 3D and binaural projects.

Metrica uses Eurecat SfËar immersive audio technology to record and mix projects for the music, film, advertising, TV and gaming industries. The facility is also a research centre for Eurecat so that it can further develop its 3D audio plugins and sound rendering software.

The trio behind Metrica are producer and engineer Javier Ferrer Serra, musician and producer Matias Kamelman and Shams Faure, who has extensive experience of running record labels and radio stations and who was brought in as head of operations and co-ordinator to oversee the building and running of the studio.

Consisting of a 70m live room and a 60m control room, Metrica was conceived and designed by Phillip Newell and executed and crafted by Joules Newell and his team. The 25.3 PMC monitoring system is set up in the live room, which doubles as a mix room for Sfëar projects.

Sfëar immersive audio technology features real-time 3D audio plugins and sound rendering software, which is fully compatible with all common Digital Audio Workstations (DAWs). The 3D audio produced can be rendered to a loudspeaker set up as well as binaural using headphones and head trackers.

Thanks to its layout calibration tool, Sfëar’s sound rendering software makes the system aware of the position of each loudspeaker. This calibration can be saved for later use and even for adapting previously made recordings to a given layout. “Immersive sound is the future – and it is here, today,” Faure says. “When it was first conceived the world wasn’t ready for it, but now it is and you can hear 3D and binaural sound in many places, even YouTube. This means there is a requirement to produce specific content and that’s where Metrica comes in.

“Our aim is to produce 3D and binaural content and help the music industry embrace this revolutionary technology, which in our opinion it desperately needs. The idea is to turn music from simply ‘listening’ into an experience. Imagine revisiting all the classics in a way you’ve never imagined they could sound. Imagine great artists not being confined to a plain stereo image. The artists, the industry and the listener will have something absolutely new that they have never experienced before.”