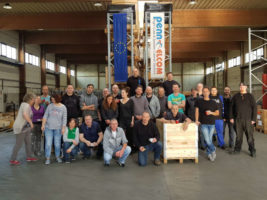 Penn Elcom GmbH in Germany has moved to a new 8,000 square metre premises in Elten, north Westfalen just 10 kilometres from the previous warehouse.

From this hub, the company distributes more than 1,700 product lines and hardware including 19″ racking, flightcase components and loudspeaker elements directly to B2B and B2C customers all over Europe.

The new facility will assist in streamlining efficient delivery of products worldwide which are manufactured by Penn in the UK.

It was imperative to stay in the same regional location, explains Dennis Marco Meertens, co-MD of Penn Elcom GmbH with Thomas Mostar. “Elten is perfectly positioned for expedient onward transportation and delivery to our local and regional sales teams – a very successful model devised to best understand specific cultural needs, demands and variations – which represent a variety of different market sectors,” he commented.

The German distribution centre is set to dramatically expand the number of Penn product lines with which it deals in the coming months due to the extra space.

The new building, close to the Dutch border, was previously used for distribution, so already had substantial infrastructure in place that was of direct benefit to Penn.