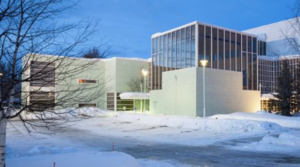 The system was designed and installed by Audico, L‑Acoustics certified provider distributor for Finland.

Opened in the 1980s with the aim of offering visitors ‘unique experiences for all the senses’, Kuusamo Hall had not received an audio upgrade since the time of construction and comprised only flush mounted ceiling speakers. Although visually unobtrusive, they were unsuitable for visiting productions, imposing on each performer to bring their own PA.

“The premise of the new sound system was to make the venue more attractive to a wider variety of touring acts,” said Audico’s Pauli Molnár. “It’s a really beautiful hall, but with everyone bringing in their own equipment, load out times were long and the house technicians had to wait until guest engineers had packed everything up. It was extra work for everyone.

“Kuusamo Hall is a multipurpose venue that hosts a large variety of music events. The idea was to have a touring quality sound system already installed, so the only thing visiting acts need to do is set up mics and consoles to be ready for soundcheck.”

Audico visited the space in 2016 and submitted their recommendation during a tender process. Working alongside L‑Acoustics application engineer Gert Wiersema, Molnár kept the design of the system as simple as possible, choosing the ultra-compact Kiva II for its long throw capability and even SPL.

Eight Kiva II topped with two SB15m subs are positioned either side of the stage, along with two centre hung SB18i sub woofers. Six 5XT are positioned across the stage lip as front fills and six X12 provide stage monitoring.

The system was installed over a week just before Christmas.

“The Kiva II system works extremely well and provides the consistent coverage the venue was after,” Molnár concluded. “It has already been used for a variety of musical genres and everyone has been consistently pleased with the results. It’s even great for rock ‘n’ roll gigs, which they had found tricky before because the acoustics of the Hall are not ideally suited to the genre. This is now a true multipurpose venue that can host absolutely anything.”