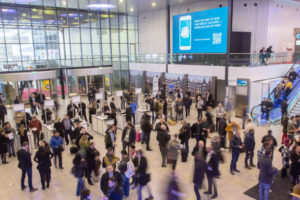 Opinion: Why is ISE becoming more of a draw for the pro audio world?

Installation editor Paddy Baker gives his take why ISE is growing at such a pace, especially for those on the pro audio side of the industry

Integrated Systems Europe has become such a fundamental part of the installed systems marketplace that it’s sometimes easy to forget that it’s only been going since 2004.

The first ISE took place in Geneva, in a single hall, with 120 exhibitors. It soon found its home at the RAI in Amsterdam, where it has grown strongly and steadily: last year’s show had almost 1,200 exhibitors and 73,000 visitors. For ISE 2018, another hall has been added at the RAI, bringing the total to 15.

Why has this happened, and why is it becoming more of a draw for the pro audio world? The reasons fall into two groups: those about the show itself, and those relating to pro audio market trends.

For the past decade or so, there has been a noticeable trend for audio manufacturers to expand from live into fixed install. So it stands to reason that they would choose to exhibit at what has long been Europe’s leading show for AV systems integration, and in now the top show in this market globally. But there’s more to it that that.

ISE is, of course, all about integrated systems. While ‘pure’ audio jobs do still exist, increasingly audio is part of larger, more technologically diverse projects. ISE is a major showcase for manufacturers of displays, projectors, lighting – as well as the transport and control infrastructures that enable the different elements of an installation to communicate with each other. Now, since the advent of audio over IP, these large-scale projects can be made more flexible and more cost-effective to deliver.

In the world of integrated systems, there are many types of people who can influence product selection: integrators, consultants, distributors, end users. All of these are well represented at ISE. In fact, the show has continued to grow in recent years by attracting people from outside the traditional channel, such as end users.

Additionally, as technology progresses and becomes more complex, there has also been a recognition among manufacturers that no one can do everything. If another company has a technology that complements yours, it’s often better to partner with them rather than spend time and money creating your own, probably inferior version.

So there are all kinds of conversations taking place at ISE. People come to find solutions for projects they are working on; to discuss distribution deals; to consider technology partnerships; to keep abreast of the latest tech trends and maybe discover the unexpected; and simply because they know their peers will be there.

And because ISE has become the top show, it’s the one that is on everyone’s list. While other shows have suffered a marked exodus of big audio names, ISE just goes from strength to strength, attracting new attendees each year. In 2017, one visitor in six was attending the show for the first time.

In fact, such has been ISE’s success that it is even starting to encroach on the live market. In 2017, 18% of attendees said they operate within the live events marketplace. Perhaps as a reflection of this, ISE 2018 sees Hall 7 change from being the Audio hall to Audio and Live Events.

Finally, the timing and the location of ISE have also played a part in its success. Amsterdam is a major hub airport – a significant chunk of Europe can get there by plane in two hours or less. It’s a pleasant, relatively compact city to visit, even in harsh winter weather. And its position in the calendar seems to fit well with many manufacturers’ product development and marketing schedules. ISE looks set to be part of the installed systems landscape for some time to come.