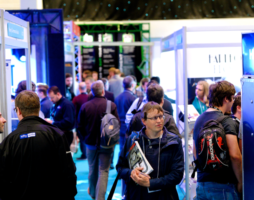 PLASA Focus Leeds to ‘raise the bar even higher’

PLASA Focus Leeds commercial director, Christopher Toulmin, is hoping this year’s event will “raise the bar even higher”, as the annual event celebrates its 10 anniversary.

Taking place from May 1-2 at the Royal Armouries, Leeds, this year’s PLASA Focus will feature an array of product showcases, workshops, panels and training sessions for the pro audio and lighting industries.

Commenting on this year’s outing, Toulmin said: “PLASA Focus Leeds has continued to grow throughout the past decade, and based on everything we have learned along the way, this year’s show is set to raise the bar even higher. Everyone at PLASA has worked incredibly hard to make sure the tenth anniversary edition of the show is both outstanding and relevant for all areas of the entertainment technology industry.”

Audio enthusiasts can get hands-on with digital mixers with Soundcraft’s Andy Brown and Sound Technology’s Ben Todd, while also getting to grips with Line Array systems with Harman’s Ed Jackson and Sound Technology’s Stuart Strachan. Visitors can learn about frequency response with Oran Burns of d&b audiotechnik, or touring monitors with Justin Grealy of Soulsound. Plus, PSNEurope regular contributor Phil Ward and a pro audio panel will explore the rapidly evolving world of object-based and spatialised audio solutions.

Meanwhile, production professionals can listen to Rob Halliday’s panel of professionals who were involved with creating the Chester Storyhouse – the largest project of its kind outside of London. Furthermore, Fiffi Thorsteinsson will present Vectorworks, the leading software for entertainment design, while this year’s Riggers’ Forum re-visits competency and responsibility.

In addition, PLASA’s Professional Development team will be presenting a range of seminars to build technical know-how and business acumen: James Eade will explain electrical standards updates for the UK, Tom Goode is hosting a health and safety clinic, and Lauren Rogers will reveal how to improve marketing and communications. The Association of British Theatre Technicians will also be on hand to provide updates on Technical Standards for Places of Entertainment.

Guild Introduces the Starfire I Series