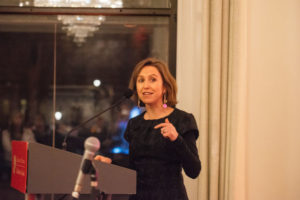 Last month, the PRS Foundation’s Keychange campaign was officially launched, aiming to achieve a 50:50 gender balance on festival line-ups by 2022

The gender gap in music is evident across every aspect of the industry – from the boardroom to the recording studio, from CEOs of major companies to collecting societies’ songwriter memberships. Where that gap is most obvious to the general public is on the festival stage. Blanked out posters on social media are stark reminders of the almost complete absence of female artists at some major music events. Every year there’s a big debate and yet programming at many events seems to remain very unbalanced.

These factors are leading to an interesting situation. Because the live music industry is most frequently in the spotlight, that’s where some of the most inspiring gender equality initiatives are coming from. Against the backdrop of #MeToo and the thousands of voices on Twitter who want more women on stages, a growing number of festivals are showing that they want to bring about change.

At PRS Foundation we’ve been proud to help with a number of these initiatives, which are taking different approaches to the same goal. ReBalance, which was created by Melvin Benn at Festival Republic, invests in the grassroots of the industry by supporting 12 core female acts per year to spend time in the recording studio with a female producer mentor. We’ve been helping to recruit and select emerging artists and to support the producer mentors. Festival Republic takes care of the studio residency and provides opportunities for participating acts to perform at one of the Festival Republic events (watch out for Æ MAK performing at this year’s Latitude Festival).

The other gender equality programme we’ve been busy with is Keychange, a fast-growing network of festivals from across Europe and North America. This began as a talent development scheme but quickly evolved into a broader campaign through which our festival partners are proposing to reach a gender balance within five years. Their 50:50 pledge across stages and panels by 2022 has now been adopted by over 45 festivals from Brighton, Hamburg and Gothenburg to Rejkavik, New York and Toronto with more to sign up over the next year.

Coordinating Keychange and supporting its rapid evolution from EU-funded project to international movement has been a hugely informative and motivating experience. One that suggests that this is going to be a real game changer for live music over the next decade. We’ve discovered that across all music genres – from jazz and contemporary experimental to electronic, pop and indie – many festivals are beginning to examine their own structures and they recognise the benefits of promoting more women. They also appreciate connecting with a movement that’s bringing people together in pursuit of the same goal.

We’ve learned that several of the festivals – like Way Out West in Sweden, Borealis in Norway and Manchester Jazz – have already reached a 50:50 balance across their live music stages. They are using Keychange as a way of demonstrating that equality is possible whilst showing that working in this way has to be a constant, conscious commitment, even when you’ve reached your goal.

We also know that other festivals have further to go before gender balance is a reality but have joined in with the spirit of Keychange – an aspirational pledge against which they’ve put their name as a statement of intent. Keychange is not about naming and shaming and it’s not a quota. It’s a step forwards that the festivals themselves have created. It’s a tool for measuring progress, being ambitious and defining a 50:50 commitment that each festival shapes to suit their event.

Keychange and ReBalance are just two of the many important programmes which are promoting gender equality in music. Brighter Sound’s Both Sides Now programme in the north of England, Girls I Rate’s Songwriting Academy and Saffron Records’ Women in Music events in Bristol are just a few examples of other projects we’re helping to support.

This range of different starting points backed by a shared passion for fundamental change makes me optimistic that 2018 will be a watershed moment for women in music; the year that men and women will remember not just as the centenary of women getting the vote in the UK, but as the beginning of a new era; the year that the music industry stepped forward – alongside our colleagues in film – leading transformative, positive action towards a better future.

If you’d like to hear more about Keychange or join in with the pledge, please get in touch.