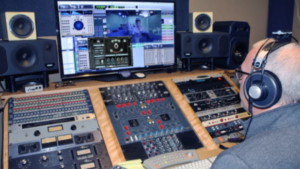 Yaskulka originally intended to mix in the theatre room in Spinifex, the creative agency where the VR project is based. Time restrictions meant he had to work from his new studio in Sound City, California, and was “basically working out of boxes”. Temporarily without a traditional 360-degree mix environment but working within tight deadlines, Yaskulka found a suitable mixing solution with Waves Nx – Virtual Mix Room over Headphones.

Yaskulka said: “I had heard good things about Waves Nx technology for 3D audio on headphones, so I thought I’d give it a try – nothing to lose. I had no viable monitoring facility, so I went ahead and used a pair of AKG K702 reference headphones, with the Nx Virtual Mix Room plugin and the Nx Head Tracker attached to the headphones. I ended up mixing 90% of the project on headphones. The remaining 10% was done in the Spinifex theatre, and I was amazed, as it sounded almost exactly the same in that acoustically magnificent theatre as it did on my headphones with Nx. Everything – the localisation, the spaciousness – matched, and I ended up just making a few tweaks here and there, mainly to be able to work with the producers, in order to dial in sound design elements.”

Yaskulka continued: “This was a project aimed at celebrating Elton John’s music, not reinventing it, so I researched the original recording process of all these songs and what technology was used at that time, and I applied the right plugins to recreate the sounds I was looking for.

“For example, on the vocal for Your Song I used the Waves C4 Multiband Compressor, the CLA-2A Compressor and the Waves DeEsser. On the piano, I used the Waves MV2, the Scheps 73 EQ and the PS22 Stereo Maker. For the vocals on Saturday Night’s Alright (for Fighting) I used the SSL G-Equalizer and the CLA-76 Compressor. On the vocals of Rocket Man and Goodbye Yellow Brick Road I used the F6 Dynamic EQ to dynamically control the vocal track, and again the CLA-2A. Also, when we matched the audio and the visuals in the theater room, everything worked flawlessly. But once the tech team did a run-through test with some of the VR headsets, they found they were having sync issues.

“That’s where the Waves SoundShifter plugin came in. It was a split-second fix that needed to be made on the spot: we had to time-stretch the first scene by 100 ms. SoundShifter did it perfectly, no glitches, no artifacts. I used a set of Waves 5.1 surround plugins to pull off the balance and the spread in the surround sound design – the R360 Surround Reverb, the C360 Surround Compressor, the L360 Surround Limiter and the M360 Surround Manager & Mixdown.

“Basically, I’m just glad Waves Nx was there to help me solve this particular one!”