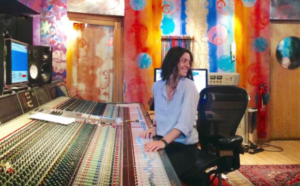 The award-winning engineer has penned an impassioned plea in defence of the London studio, which is under threat from new development plans.

The iconic Shoreditch studio has previously held recording sessions for the likes of the Spice Girls, Nick Cave and the Bad Seeds and Radiohead.

Now, a new office block proposal set to be developed on one side of the building could potentially put the studio out of business, with founders claiming that the predicted 18 months of building work would be catastrophic for the business.

Now, Salogni, who won Breakthrough Engineer at this year’s MPG Awards, has spoken out in an exclusive piece written for PSNEurope, in which she outlines the significant social and cultural impact the facility’s closure would bring and calls upon the pro audio and music industry to sign the recently launched petition to halt further development.

See below for the piece in full:

When the news of a possible closure of Strongroom because of redevelopment plans of the area just next to it reached me, I struggled to think of a more shortsighted, culturally irresponsible, unnecessarily covetous action from the developers.

A recording studio is an organism, which is part of the fabric of national and international culture; a machine which generates testimonials of an era, which documents and immortalises popular history – musically, socially, politically.

It’s important not only under an intellectual aspect; it generates revenue for the nation, too.

Many artists come to the UK – especially London – to record their songs because of its musical heritage, because of its facilities, because of the people who live and work out of its studios. I am one of those people too. I came here in 2010 because I wanted to pursue a career in music and knew the UK would have been the best place to do so. I started working at Strongroom shortly after, firstly building and taking care of Studio 4 as the in-house engineer there, then freelancing for all of its studios.

There I built my experience and developed my work process. I met artists and producers I then collaborated with in ever growing capacities. My career would have definitely been different without Strongroom.

Its closure would put a big dent into the music business and, consequently, the wealth of UK arts.

The importance of opposing the planning permission must be taken very seriously, as its consequences will affect a greater picture in the name of a mere temporary profit.

The gains of unregulated mercenary are ultimately short lived.

When Strongroom opened in the ‘80s, Shoreditch wasn’t the fashionable, gentrified area we all know now. Lower prices meant that artists could afford a place in the neighbourhood, shaping a creative synergy that then attracted wealthy investors. Those started capitalising on that creative force, commercialising the hype, attracting more wealth and therefore raising the property prices, consequently pricing out the people who first transformed a neglected part of town into the blooming Shoreditch everyone is now aware of. The boundaries of profit are currently so pushed into the ridiculous, the system is doomed to collapse onto itself like a black hole, ingurgitating all the light around itself. Generating nothing.

Strongroom is a place of cultural and social relevance, past, present and future – to protect it against an arbitrary closure is a duty.

Its loss would be inexcusable.

You can read our interview with Salogni on her engineering work on Bjork’s 2017 Utopia here and listen to her PSNEurope Women In Audio podcast interview here.