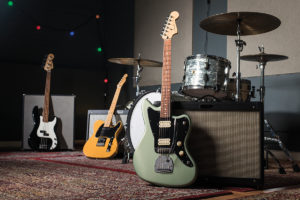 The past two years have seen Fender reinvent its American Standard series as American Professional and American Vintage as American Original. Now the company’s attention turns to its entry-level models as we say adios to the popular Mexican Standards and hola to the Player series…
Story Chris Vinnicombe
Instruments photographed on location at Mizpah Studios in Bath. Visit instagram.com/mizpahstudios to find out more

Walk into any pub in the Western world and – assuming that it hasn’t recently been turned into an artisanal gin bar staffed by Victorian strongman lookalikes with a strict cassette-only music policy – if there’s a band playing on stage then it’s more likely than not that someone will be playing a Mexican-made Fender electric guitar. Or a Fender Hot Rod Deluxe. Or both.
To say these are products that are part of the staple diet for the grassroots gigging musician is an understatement. We all know the story: our first guitar was a borderline-unplayable nylon-string acoustic, then we graduated to a Squier Strat while making a teenage racket in the garage. It was perfectly functional but the allure of the ‘real thing’ was strong. We just had to have that iconic logo on the headstock, didn’t we?
Although the funky Duo-Sonic and Mustang models in the Offset series that arrived back in 2016 represent a hip and very reasonably priced entry point into the catalogue, not everybody shopping for their first Fender wants a compact, short-scale instrument. Just ahead of Summer NAMM 2018, Fender has decided that the time is right to reimagine its entire Ensenada-made Standard line, last overhauled back in 2011. Enter the new Player series.
With a two-point vibrato, a bridge tone control, a 9.5-inch ’board radius and headstock-end truss rod adjustment, this is very much a Strat for the pragmatic, modern player

“The Player series is the entry price point to the Fender brand if you’re looking for a traditional Strat, Tele, P-Bass, Jazzmaster et cetera,” says Justin Norvell, Senior Vice President of Fender Products. As well as ticking all the ‘first serious guitar’ boxes for musicians taking a step up from a beginner’s instrument, Norvell also believes that the Player series will be a hit with “pros looking for a backup axe, bassists looking to dabble with fretless or five-string, and modders that want a great base platform.”
“The main thing is that so many upgrades are subtle,” Norvell notes. “One could look at it from arm’s length and think it looks the same… but literally everything is changed!” With that in mind, then, it’s time for us to take a closer look…
With 21 different models in the Player series, and over 90 different variations when you throw finish options into the mix, there’s an awful lot to take in here. The expected Strat, Tele, Precision and Jazz are accompanied by HSS, HSH, Plus Top, HSS Plus Top and Floyd Rose Stratocasters, a HH Telecaster, a Jaguar, Jazzmaster, Jaguar Bass and fretless and five-string Jazz Basses. On top of all that there are a total of eight models available for lefties (Strat, Tele, J and P-Bass with either maple or pau ferro fingerboards) and the whole Player range is priced competitively with MSRPs between £549 and £789.
The Telecaster keeps things relatively classic on the looks front, though the six bent steel saddles on the bridge are an addition that recalls recent American Standard models

Aside from new Modern C necks with classic ‘spaghetti’ headstock logos across the range and 22 medium-jumbo frets on all six-string electric models, the Player models come equipped with more curvaceous bodies with improved radii, new hardware, an attractive palette of vibrant new finishes and perhaps most significantly, upgraded pickups featuring alnico magnets.
“The Standard models had slightly hot and dark ceramic bar magnet pickups that we felt didn’t really bring out all the nuance, personality and clarity that a Fender is known for, but they did perform well with higher gain sounds,” explains Norvell.
“Therefore, we knew we wanted to step up to a more complex alnico pickup, while also retaining some hotness and output, so we went with alnico Vs on most guitars and a few have IIs. We went through several months of shooting out pickups and probably a dozen sets until we were happy.”Close Encounter
As the approaching flotilla of cardboard boxes darkened the horizon at The Guitar Magazine HQ, we dutifully rolled up our sleeves and set about reviewing all 94 permutations of the Player series. Alright, we didn’t really do that, or we’d still be writing his long after the magazine had appeared in your hands! What we did instead was select four models that provide a good cross-section of the range, whether your tastes lean towards traditional six-string electrics, classic offset models with a twist or deep vibrations of the bass variety.
First up in its Sonic Red livery is the Player Stratocaster. It’s a familiar combination but what sets it apart from the vintage-style Hank and file is a 22-fret, CITES-friendly pau ferro fingerboard (other finish options are available with maple ’boards, see spec for full rundown) and two-point vibrato. If you are reading this and breaking out in a cold sweat at the idea of a Strat with 22 frets and a two-point vibrato then Fender already makes reasonably priced Stratocasters for you, and they can be found in the Classic Series.
The Strat’s fingerboard edges and fret ends are a little sharp, but as these are early review samples that haven’t all spent time on a tech’s bench, we’ll give Fender the benefit of the doubt – especially as the Tele and P-Bass have a much softer and more broken-in feel, while the Jazzmaster is somewhere in-between.
Resplendent in a reassuringly familiar and pleasingly translucent Butterscotch Blonde, the Player Telecaster’s appearance is another pragmatic mixture of eras, while the six bent-steel bridge saddles mean the overall look is reminiscent of the recently superseded American Standard Telecaster. The glossy black Precision Bass blends the timeless simplicity of one of the all-time great designs with a slinky, easy-playing neck while the achingly cool Sage Green Metallic Jazzmaster goes out of its way to annoy the purists with Jagmaster-style stripped-down controls and a pair of alnico II humbuckers with a coil split accessible via a push-pull tone control.
All three six-strings on test have slim Modern C shaped necks with a very flat-feeling combination of 9.5inch radius boards and medium-jumbo fretwire. The Jazzmaster’s neck is approximately the same depth as those of its stablemates but feels slightly fuller in terms of profile – it’s nicely rounded and the pick of the bunch here.
All three fingerboards feature extensions to accommodate a 22nd fret, while truss-rod adjustment on Player series instruments happens at the headstock end, behind the synthetic bone nut. Not having to pop the neck off to tighten or loosen the truss-rod is a boon for touring musicians moonlighting as their own guitar tech while travelling through shifting climate conditions.
The gloss urethane finish on Player series headstock fascias (and the Telecaster’s maple board) avoids the anaemic look of some older Mexican Standard instruments, while the smooth satin finish around the back of each instrument’s neck has a contemporary, drag-free feel.
For those with small hands, younger players and guitarists moving over to bass, the neck dimensions of a 50s-style Precision can sometimes be tough to get around, but there are no such problems with the svelte Player series model – although the G-string saddle on our review sample is prone to wandering a little when the string is hit hard, it’s otherwise tough to find fault with such a simple, keenly priced workhorse bass.Plugged In
When amplified, the Precision immediately offers a very direct and slightly hi-fi version of the classic P-Bass sound. Playing the hell out those clanky new strings certainly helps, and as ever a foam mute under the strings down by the bridge is the passport to woodier and more authentic 50s and 60s tones. Although it offers less girth and punch than the mid-2000s American Vintage model we use as a benchmark, it still unmistakably delivers that sound and you can make it work in the context of almost every genre imaginable.
Humbuckers in a Fender electric can sometimes be a disappointing compromise that stifles the natural bite and jangle of a
bolt-on, leaving you with a rather blunt instrument. Here, the marriage is much happier. Plugging in immediately reveals that Fender’s new Player Series alnico II humbuckers were worth the months of R&D – there’s no shortage of high-end harmonics from the Jazzmaster’s pair of double creams and the fuss-free electronics stay out of the way and allow you to get lost in the business of actually playing the thing.
The Jazzmaster strips out the complex switching and adds humbuckers and notched bridge saddles