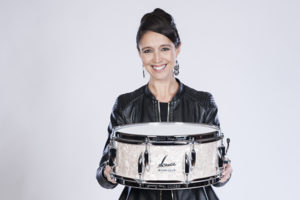 Organisers Gold Media and Events are pleased to announce that Emmanuelle Caplette will perform on the International Main Stage at The UK Drum Show on September 23rd at Manchester Central.

‘There is a huge list of exhibitors which will not disappoint visitors, with further exhibits to be announced shortly,’ plus in my 7 years of running drum events, a lineup of artists unparalleled to anything that has ever been achieved before, which is more luck than skill, due to artist availability,’ states Golding, show organiser.

‘Support for this new show has been overwhelming from the very beginning, which I am very grateful for,’ says Golding. ‘The drum community is like no other, and brands and artists have really gotten behind this new offering in the North, giving potentially fresh appeal with a new audience of drummers and percussionists.’

For any company considering one of the last few stands, should contact Gold Media and Events to be part of this debut national show.