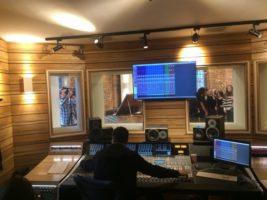 Four years after Metropolis Studios and the Academy of Contemporary Music joined forces, a flagship studio has been built at the Guildford campus to mirror the size and scale of the world-class recording studio in London

When former railway engineer Kainne Clements took ownership of London’s Metropolis Studios in 2012, it was – in his own words – “struggling”. Clements was asked to get a studio that has hosted a plethora of world-class acts, but was then “losing a lot of money”, back on its feet, and having just sold his railway technology company, he was in a position to do so.

The next year, Clements became chief executive at the Academy of Contemporary Music (ACM), a music education college in his hometown of Guildford. In this double acquisition of sorts, he saw an opportunity for the two to work together: for Metropolis to provide training opportunities and futureproof its recruitment strategy; and for ACM to get its students working with Metropolis’ world-class engineers, who among them have credits for the likes of Queen, U2 and Adele.

Almost four years in the making, a flagship studio mirroring the quality at Metropolis – both technically and aesthetically – is now open, giving students a taste of what it’s like to work in a state-of-the-art recording studio. Designed by ACM’s Neil Martin, with input from Metropolis’ head of technical Nick Wrate, “it was essential that the studio was designed in a way that would create an environment where students would have the confidence to learn about working in a recording studio,” says Martin.

The control room has rows of tiered benches so students can look over the shoulder of the tutor, who teaches from a 24-channel SSL Duality console. The desk has Dynaudio monitoring and a suite of digital audio workstations, such as Pro Tools, Ableton and Logic, and plugins including Fab Filter, Native Instruments, Plugin Alliance and Steven Slate.

Aesthetically, it has a similar vibe to a standard Metropolis set-up: big industrial windows in a spacious room create the ‘real’ environment that Clements was keen to create. At the launch event, Clements commented on the importance of training students on kit used in professional environments to give them the skills they’d need to be employable in an “extremely competitive industry”.

Metropolis engineer Liam Nolan was brought in for the first live recording in the studio in January, where a 20-piece choir and band recorded a track penned by an ACM student for invited members of the industry and trade press. Nolan, who sat behind the desk for three takes of the recording, said: “I’d be pretty happy working out of these rooms, they are genuinely brilliant.”

It’s now the largest studio at the Guildford campus, where students enrol on a fixed BA in Music Industry Practice with a choice of five different pathways, including a producer route and technical services route. The SSL flagship joins a smaller studio sponsored by PRS Foundation, and a mid-size studio complete with Audient desk.

Simba Mlambo, ACM applicant experience, events and outreach coordinator, commented: “It’s great to now have all these different spaces around the campus for students to develop in and progress on to.”