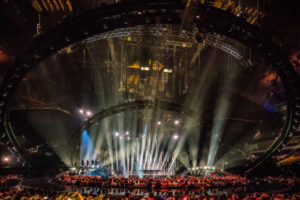 ‘This is big’: how Sennheiser ensured world-class sound at the Eurovision Song Content 2018

Sennheiser’s Digital 6000 wireless system made sure contestants were heard loud and clear at this year’s Eurovision Song Contest, despite the fact that mic-ing up almost 50 acts over the course of a week of live finals creates a logistical challenge like no other…

When we arrive at the gates of the Altrice Arena in Lisbon, there is still a week to go before 2018’s Eurovision Song Contest (ESC) final. 2017 winner Portugal proudly served as this year’s host and at the time of PSNEurope’s visit, the city is already abuzz with excitement. Posters and banners line the streets; a huge screen ready to broadcast the final takes centre stage at one of the city’s main squares; and everyone you talk to in the city has something to say about it.

By the time you’re reading this, you’ll know that this year’s victorious winner was Israel, who won the competition for the fourth time in ESC’s history (the last being in 1998). Next year’s event will therefore take place in Israel, although, at the time of going to press, ESC organisers had just warned fans not to book flights due to ongoing question marks over where precisely it will be held.

But back to Lisbon for the 2018 edition, and the scale of the technical rehearsals make it clear just how huge the task of providing sound for one of the most televised events of the year really is. And, like everything that has ever gone before onstage, there’s no predicting exactly what will happen on the night. This year was no exception, as the UK’s hopeful contestant Su-Rie was interrupted by a stage invader who snatched the microphone out of her hands midway through her performance. But situations like this avoided total disaster thanks to the capable hands of official technical supplier Sennheiser, which supplied its Digital 6000 wireless system for the event (with – luckily – almost double the amount of equipment needed onsite in case any emergencies should arise).

Amazingly, three weeks’ get-in time with just three members of Sennheiser staff for the whole production resulted in an ambitious 72-hour get-out. Efficiency, then, is a word that springs to mind on PSNEurope’s tour of the arena, as Sennheiser prepped for the biggest live broadcast music event in Europe this year.

More than 180 million people were expected to tune in to this year’s final, and Sennheiser’s director of customer development and application engineering, Volken Schmitt, was “more than confident” that the Digital 6000 was up to the job.

“The transmission sounds better than ever and we have better control over the entire system, as well as having lots of features that we can remotely control,” Schmitt adds. More than 210 tonnes of kit was flown from the ceiling (with no boxes on the floor as to not block sightlines), with 1.2km of RF cable running through the 20,000-capacity arena.

So how does this process work logistically? As you might expect, Eurovision is a year-round event for its technical teams, and for this year’s show (the 63rd ESC in its history) negotiations started as soon as the curtain fell on the 2017 event. Host broadcaster Rádio e Televisão de Portugal (RTP) first contacted Sennheiser in June 2017 about pairing up for the 2018 edition, and a face-to-face meeting was held in December last year. The RF system design was then drawn up in the spring, before rehearsals began in earnest on April 22. Around 120 sound engineers worked on the event, this year led by head of sound Daniel Bekerman.

With 43 countries competing over the contest (only 26 make it to the final stages), it’s important that no country is seen as more important than another. Communications between the artists and the Sennheiser team are all recorded via a Pro Tools rig, “plainly because it is a political event,” comments Kevin Jungk, customer development and application engineer at Sennheiser, who worked with the wireless RF team in Lisbon. “The ESC is around 43 countries competing with each other. If any country thinks they’re at a disadvantage, they will do everything in their power to re-do their rehearsal, or have another try on stage,” he said. “This is why everything has to be really strict. There’s no preference for the host country or anyone else – everything has to be the same for everyone. “And as it’s Eurovision, we have spares for everything. Actually, we have spares for the spares for the spares.”

The first thing a contestant must do before going on stage – before their mics are dressed and body packs set up correctly – is check the monitor sound from their in-ears. Digico’s SD7 is the mixing console of choice for the event, with most of the 15 desks onsite bearing the British company’s name. Schmitt explains: “[The soundcheck room] is the point where the adjustment for the in-ear mix is done. From here, we take the file from each and every country and distribute it to the other mixing desks. There’s no speaker running – they only hear themselves via the in-ears. This is completely different from when they are walking into the arena through the tunnels, where we have a little bit of sound reinforcement. That’s where contestants realise, Oh my gosh, this is big.”

So, what challenges arise from having such a tight rehearsal schedule with more than 40 different contestants – and hundreds of people walking in and out of the arena at any one time? RF interference is one: “Unauthorised wireless systems in the arena is the biggest challenge for us,” says Schmitt. In fact, the strict rules about what could be brought into the arena garnered international attention – wireless equipment was included in a banned list of items, which went viral on social media, including seemingly bizarre items such as handcuffs, golf balls and mugs. Another item that proved problematic for the radio frequency was an all-metal dress worn by one the contestants, added Schmitt. But wardrobe malfunctions aside, not only was Sennheiser more confident in its new 6000 technology, the wireless system’s improved workflow and the thorough preparation from Sennheiser’s teams delivered optimised sound throughout the show. By the time you’re reading this, a venue for 2019 may well have been decided upon. Let’s hope there’s enough time to prepare as smooth an operation as this year.