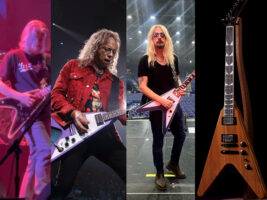 2022, the year of the Flying V: a rundown of the teased and confirmed upcoming Gibson signature Vs

Following the official announcement of a range of signature Gibson Flying V models for Megadeth’s Dave Mustaine, there are a number of teases and hints that could make 2022 a very Flying V-heavy year for Gibson’s signature models. Here’s a rundown of what we know so far.

Kirk Hammett
Kirk Hammett recently posted an Instagram photo in which he was playing a new purple Gibson Flying V during a Metallica concert on 19 December at the Chase Center in San Francisco. Hammett joined the Gibson family in July of last year, however no official announcement has been made on what will come under his signature models. The guitar in the Instagram photo does resemble a 70s flying V, aside from the finish, as it has pickup rings on top of the pickguard. Hammett’s first Gibson guitar was a 1979 Flying V in black, which also had the pickup rings.
Gibson’s Cesar Gueikian commented on the post, stating simply: “Oh yeah”, alongside several fire emojis.

Could we see a signature model based on Hammett’s 1979 Flying V? The Gibson Custom Shop has recreated that guitar before, but the purple finish shown in the photograph suggests any upcoming signature models will be a departure from the ‘reissue’ approach. The purple finish could even be one of multiple options available, but we’ll just have to wait and see.
Hammett also has a penchant for purple signature models. Two of his ESP guitars were released in purple sparkle. One was a limited edition Ouija model, the other a KH-602 model.
Adam Jones
Tool have just kicked off their massive tour in support of Fear Inoculum, and fan-shot footage (courtesy of YouTube user JJG) of their 10 January performance of Invincible shows Adam Jones playing a very odd-looking V.
Image: Gibson via YouTube
It’s clearly different from the Silverburst V briefly teased at the end of the YouTube video announcing Adam Jones’ signature 1979 Les Paul Custom, released in 2020 (see above). The V Jones is playing on stage looks to have Les Paul-style wiring (a volume and tone control for each pickup, rather than the layout of two volumes and a master tone that’s more common on Vs), no string plate but a string-through tailpiece, no pickguard and a rather strange finish. Stage lighting makes it hard to tell exactly what colour the guitar is, but it’s almost certainly not Silverburst – the edges of the guitar are brighter than the centre.
The most glaring difference, however, is the headstock. The guitar Jones is playing on stage has a forked headstock, with two prongs providing a miniature reflection of the V’s body. These forked headstocks have been seen on a handful of Gibsons before, mainly the ultra-rare Futura, and a handful of its better-known successor, the Explorer.

So what exactly is Jones playing? It’s hard to see, but there is definitely a Gibson logo on the headstock. Will this forked-headstock oddity be joining a more traditional Silverburst Flying V in a future signature lineup? Or was this just a whackily-spec’d one-off that Jones asked Gibson for while they tooled up for his standard signature? Either way, we’ve got to sit tight and wait for an official announcement.
Richie Faulkner
In February 2021, Gibson’s Cesar Gueikian teased a new version of Richie Faulkner’s signature Flying V model in a new post on Instagram. The Judas Priest guitarist’s signature Epiphone V was discontinued, but Gueikian’s photograph showed a V with a Gibson logo, and a lot of the same features that defined the Epiphone version. There’s a Floyd Rose-style tremolo and locking nut, a single volume knob and a symmetrical pickguard.

Shortly after this photo was posted, Faulkner uploaded a humorous video in which he discussed the features of his hypothetical signature while holding up a short-scale pink Flying V. He was, however, sitting in front of two versions of his signature guitar.
Almost a year has passed with few updates, although the guitar Gueikian photographed was played by Faulkner on Judas Priest’s recent tour. The delay, however, could have something to do with Faulkner’s health – in September of last year, he suffered an aortic aneurysm on stage, landing him in hospital and causing the band to postpone the rest of their tour.
Despite the severity of the incident – he underwent a ten and a half hour emergency open-heart surgery – the last update from Faulkner, posted on Judas Priest’s website, was positive. He is also set to return to the stage in March, with Judas Priest’s rescheduled 2022 tour.
Dave Mustaine
Entering less speculative territory now, Megadeth frontman Dave Mustaine’s signature Gibson Flying V EXP was officially announced for a “very limited” rollout, of this year, with a wider release coming in February 2022. The guitar is a stripped-back take on the V, with no pickguard and either a Silver Metallic or Antique Natural finish. The guitar is one of several planned for Mustaine’s Gibson lineup, including models under the Epiphone and Kramer range.
Images: Gibson via YouTube
Aside from the acoustic model, all of the announced guitars for the range are V-shaped – the Kramer signature model bears a similar featureset to the Gibson model, however design-wise has much sharper bevels on the horns, and much pointier tips.
No information on the Epiphone Dave Mustaine offerings has been made available yet,

If the guitars on this list arrive in 2022, it’s set to be a huge year for fans of the Flying V, with a potential smörgåsbord of signature models on the way.
The post 2022, the year of the Flying V: a rundown of the teased and confirmed upcoming Gibson signature Vs appeared first on Guitar.com | All Things Guitar.