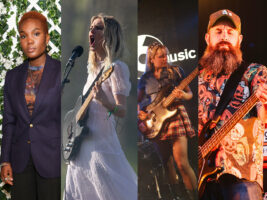 The nominated albums for the 2021 Mercury Prize have been revealed, with bands such as Wolf Alice, Black Country New Road and Mogwai making the list.

The full list spans a wealth of genres, but from a pure guitar perspective, there’s still a breadth of sounds on display. There’s the eclectic singer-songwriter style of Fender Next artist Arlo Parks sitting next to the angular post-punk-post-rock meld of Black Country New Road, the fuzzy soundscapes and more traditional post-rock of Mogwai, and a refreshed, updated take on dream-pop and shoegaze from Wolf Alice.
Beyond the six-string are the list continues to reflect a sonically and culturally diverse UK music scene. There’s Promises, the stunning collaboration between Floating Points, Pharoah Sanders & The London Symphony Orchestra, as well as the powerful Untitled (Rise) from rhythm and blues collective SAULT. Check out the full list below.

Celeste – Not Your Muse

Mogwai – As the Love Continues

The Mercury Prize judges, including Michael Kiwanuka, Anna Calvi, Annie Mac, Jamie Cullum and more, said: “It is testament to the strength of British music that, during a year which saw musicians face the toughest challenges of their lives, so many remarkable albums came out nonetheless.
“There was an embarrassment of riches for this year’s Mercury Prize judges to choose from, but the final twelve show how diverse, vibrant and far-reaching British music continues to be. Choosing one winner out of twelve albums that bring so much hope for the future will be a challenge indeed.”
Notably, Wolf Alice have already taken home a Mercury Prize, having already won in 2018 for their album Visions Of A Life.
The post Arlo Parks, Wolf Alice, Mogwai, Black Country New Road: here are the nominations for the 2021 Mercury Prize appeared first on Guitar.com | All Things Guitar.