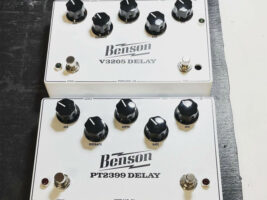 Benson Amps has shared a photo of two brand new delay pedals, though according to the company there’s still some time to go before they’re available to buy. The picture shows two pedals, the PT2399 and V3205, both dual-footswitch stomp boxes enclosed in a white chassis, not dissimilar to Benson’s classic-looking Germainium Fuzz.

“Still about 10 months out,” said Benson in an Instagram post. “Prototypes are sounding good. I love this size but the final thing will be compact and probably not white (though we might do runs of the big box ones for fun).”
The PT2399 looks to be based on the PT2399 chip, a digital processor known for its ability to emulate bucket brigade delay-based circuits with its analogue character, but also able to be pushed into jittery, digital sounds. PT2399 chips generally offer between 30ms and 340ms of delay. The V2305, meanwhile, is a low noise bucket brigade chip. Both pedals feature knobs for mix, feedback, depth, rate and an LFO. Next to a bypass footswitch they also both feature a Hold foot switch.
To stay up-to-date, head to bensonamps.com
The post Benson Amps teases two new delay pedals appeared first on Guitar.com | All Things Guitar.