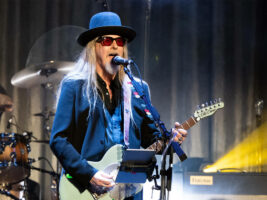 Jerry Cantrell on songwriting: “It’s more interesting to me to go into a project without some sort of plan”

Jerry Cantrell of Alice In Chains has recently spoken of his approach to songwriting as a solo artist compared to writing with the band.

The Man In The Box singer has four albums as a solo artist where he collaborated with artists such as Robert Trujillo (Metallica) and Rex Brown (Pantera) away from his own band.
In a recent interview with SiriusXM, Cantrell spoke of how many of his songs came to be from long periods of crafting, “The riff to Atone; I mean I literally had it for years I couldn’t finish it.” He added, “It comes when it comes. I’ve learnt to not discard things.”
He also revealed that he came up with the riff to Dismembered during the band’s tour with Korn and that he used to roam the halls with an acoustic guitar. “It’s more interesting to me to go into a project without some sort of plan, just naturally let it flow and see what the hell happens, that’s fun, that’s exciting for me.”
He continued, “If you’re lucky enough the thing you’ll have that people can recognise is your musical fingerprint; they can hear something within a couple of notes and go, ah I know who that is!”
Towards the end of his interview, he was asked what the difference is between writing for Alice In Chains, compared to his solo craft to which he concluded: “I get asked this question a lot, what makes it an Alice In Chains song is that Alice In Chains records it!”
You can watch the full interview on YouTube below:

The post Jerry Cantrell on songwriting: “It’s more interesting to me to go into a project without some sort of plan” appeared first on Guitar.com | All Things Guitar.