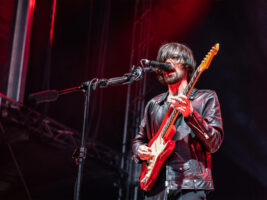 Simon Neil reveals struggles with mental health: “I couldn’t get my head into being Simon from Biffy”

Simon Neil of Biffy Clyro has recently revealed his struggles with his mental health since returning to the stage post-pandemic.

The Scottish rockers have recently been back on the road following their 2021 album The Myth Of The Happily Ever After and they even headlined rock’s beloved Download Festival last weekend.
In an interview with Kerrang!, Neil revealed he found it difficult returning to the stage following the Coronavirus pandemic, feeling he’d lost his identity and that he would never make it back on stage, “I couldn’t get my head into being Simon from Biffy. We anticipated it was going to be hard but the last two years have changed everyone in ways you can’t immediately see. I was close to just leaving [the tour] but realised if I didn’t get over that hurdle then, I might never be able to get back on a stage.”
He continued, “That might sound melodramatic but it’s how I felt and it’s a conversation I had with the boys. When I did, they said, ‘Okay, we can go home,’ but I immediately thought: ‘I’ll never leave the fucking house again.’”
It appears Neil has been receiving help from a counsellor, stating he speaks to “a guy” about his anxiety. Further in his chat, he stated: “He reminded me that this is who I am and this is what I do, and not to create a hurdle that wasn’t there before. It was about accepting that challenge and remembering I’m happiest onstage and making music with my friends. What else would I want to do? There’s nothing I’d rather do!”
Neil previously chatted to us at Guitar.com where he spoke of the underlying messages of taking care of your mental health in their latest album, “Make yourself happy right now and be with the people you care about now, we cloud our minds with so much noise. If someone’s looking to take something from this record, it’s okay to not know what’s around the corner, it’s okay to be anxious.”
You can get tickets to see the band live here.
The post Simon Neil reveals struggles with mental health: “I couldn’t get my head into being Simon from Biffy” appeared first on Guitar.com | All Things Guitar.