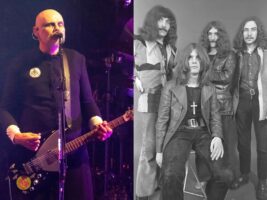 Billy Corgan says Black Sabbath was the “blueprint” for his music: “I’ve chased that sound my whole life”

Billy Corgan has opened up about the musicians that inspired him as a child and claims Black Sabbath’s Master Of Reality was a “blueprint” for his own music.

READ MORE: Bruce Springsteen Comments On The Modern State Of Rock: “I Wouldn’t Want To Be Starting Now”

Speaking during an interview with Laney Amps this week (1 November), the Smashing Pumpkins frontman elaborated on crafting his own sound – admitting that attempting to emulate Black Sabbath has been a recurring motif for a lot of his entire career.
“I’ve chased that sound my whole life,” he says, adding that it was the band’s 1971 track Sweet Leaf that first inspired him at just eight years old. “For me, Sabbath was the blueprint […] I never realised that part of what attracted me to that sound was the Laney sound.”
He continues, explaining why he was so impacted by Iommi’s tone and reflecting on how working alongside the Black Sabbath guitarist influenced his approach towards amp settings:
“A lot of guitar players — and I’m sure we’ve all met them — they kind of see guitar sound as sort of like ‘pick your flavour of a hot sauce’ or something. For me, tone is everything. When you think of Tony’s tone, it’s synonymous with the vision I get in my head of Tony’s width and size and power.”

“When I worked with Tony in the studio on his solo album [2000’s Iommi], I was shocked Tony’s gain was on 6. It’s the way that Laney sound makes you feel [that is important]… it’s not always a high-gain thing.”
Last month, Corgan also opened up about the early days of his career. Speaking with Willow Smith during an episode of his podcast Thirty-Three With William Patrick Corgan, the guitarist admitted that, during his time starting out as a musician, he often received backlash for his unconventional appearance.
The post Billy Corgan says Black Sabbath was the “blueprint” for his music: “I’ve chased that sound my whole life” appeared first on Guitar.com | All Things Guitar.