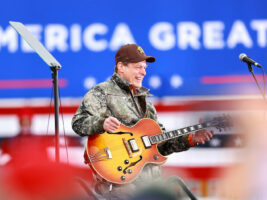 Playing the Star Spangled Banner during one of Trump’s campaign rallies has left enough of an impression on Ted Nugent for him to consider naming his last album after a “fucking cute” compliment he received from the former President.

READ MORE: The Beths on the unconventional amps and DIY improvisations that created the standout guitar moments on Expert In A Dying Field

Speaking to Metal Castle in a recent interview, Nugent told of how the album Detroit Muscle from earlier this April was nearly called Handsome Devil, which is named after him – “of course”.
“During one of his rallies, Donald Trump called me ‘The greatest Handsome Devil in the world,’ and I happen to fucking agree,” Nugent told the publication. “I just thought it was so fucking cute when President Trump – my President – called me that.”
“He singled me out in the crowd and asked me to come up and play, so I played the National Anthem and raised some adequate hell with my Detroit muscle, both literally and figuratively,” ” Nugent continued. “And after I was done, Donald looked over at me, thanked me, and he said, ‘Ted, you Handsome Devil. Thank you.’”
Nugent didn’t explain why he opted to instead name the album Detroit Muscle, however, he did speak about the record and how it might go beyond what fans typically expect of his music.
“To most people, I’m this outrageous, high-energy, rock and blues maniac, which is very accurate,” he said.”But on this record, you’ll hear this beautiful instrumental called WinterSpring SummerFall, which is very soothing and very introspective.”
“It’s me taking a moment, looking inside, and breathing easy as a break from the treachery built around us in life. The stress and the criminality inherent in our government, the overt dishonesty of media, and what people accept as ‘fact’ is fucked up.”
He added: “Maybe more than any other album, I’d say that Detroit Muscle is a true amalgamation of my life.”

The post Ted Nugent’s last album was nearly named after a “fucking cute” compliment he got from Donald Trump appeared first on Guitar.com | All Things Guitar.