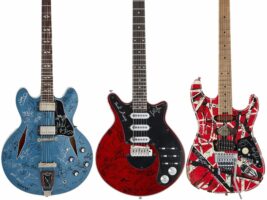 Electric guitars, drums and other instruments played and signed by some of the biggest names in rock at the two Taylor Hawkins tribute performances is set to hit the auction block later this month.

READ MORE: The Guitar Don McLean Used To Write And Record Vincent Is Going Up For Auction

The auction is held in honour of the late Foo Fighters drummer Taylor Hawkins, to benefit mental health organisations MusiCares and Music Support. Icons & Idols: Rock ‘N’ Roll collection happens between 11 to 13 November at New York’s Hard Rock Cafe.
An array of signature guitars, used on stage during September’s tribute performances, are on offer, including a Gibson Trini Lopez, an Eddie Van Halen Frankenstein, a Brian May Red Special model and a black John Paul Jones signature bass.
Image: Julien’s Auctions
Each guitar is predicted to fetch between $3,000 and $8,000 at auction, the models come bearing a one-of-a-kind set of autographs obtained from the London and Los Angeles performances. These include signatures from artists including Dave Grohl, Krist Novoselic, John Paul Jones, Brian Johnson, Joan Jett and Kesha – as well as many more.
Artist-signed drumheads and cymbals are also offered, expected to fetch around $2,000 each. A custom-built pickup truck, which was designed especially by Ram Rebel Crew Cab to “honour [Taylor Hawkins’] enduring rebel spirit” will also be auctioned off. All in all, the auction lots are expected to raise approximately $60,000 and $80,000 for charity.
“We are so grateful and honoured to have been chosen by the Hawkins family and Foo Fighters as one of the beneficiary charities,” Eric Mtungwazi, Music Support’s chief executive said in a press statement about the auction event.
“The awareness and funds raised will make a huge difference to our crucial efforts in supporting peers who work in music and live events affected by mental ill-health and/or addiction.”
Find out more on Julien’s Auctions.
The post Signed guitars from the Taylor Hawkins Tribute to be auctioned for mental health charities appeared first on Guitar.com | All Things Guitar.