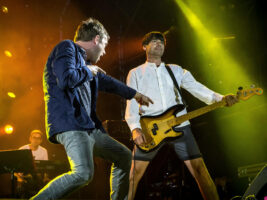 Blur to reunite at Wembley for first live show since 2015

British pop-rock icons Blur will be reuniting in London’s Wembley Stadium next year for their first live show since 2015.

The quartet will be performing at the 90,000 capacity stadium on 8 July 2023, supported by guest appearances from English singer-songwriter Self Esteem, experimental pop duo Jockstrap, and rapper Slowthai. This marks the first time the band have performed together since releasing their acclaimed eighth studio album The Magic Whip back in 2015.
News of the reunion was confirmed by Blur drummer Dave Rowntree, who made the announcement via Twitter, writing: “The worst kept secret in the music industry — we’re playing live next year.”

Of the upcoming gig, frontman Damon Albarn said, “We really love playing these songs and thought it’s about time we did it again.”
“I’m really looking forward to playing with my blur brothers again and revisiting all those great songs,” said guitarist Graham Coxon. “Blur live shows are always amazing for me. A nice guitar and an amp turned right up and loads of smiling faces.”
Bassist Alex James also added that “there’s always something really special when the four of us get in a room. It’s nice to think that on 8th July that room will be Wembley Stadium,” while Rowntree said, “After the chaos of the last few years, it’s great to get back out to play some songs together on a summer’s day in London. Hope to see you there.”
The Britpop legends are not the first to announce a return in recent weeks. Last month, Pulp announced that they would be reuniting once more, with their first performances in 10 years set for the summer of 2023.
Tickets for the upcoming Blur concert will go on presale on Wednesday (16 November) and general sale this Friday (18 November).

More details at blur.co.uk
The post Blur to reunite at Wembley for first live show since 2015 appeared first on Guitar.com | All Things Guitar.