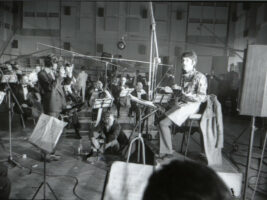 The trailer for If These Walls Could Sing, a new documentary charting the history of famed Beatles base Abbey Road Studios, is now out.

Directed by Paul McCartney’s daughter Mary McCartney, If These Walls Could Sing is set to premiere on Disney+ on 16 December.
In addition to archive footage and session tapes, the film will feature exclusive interviews with some of the biggest stars who’ve recorded there, including Elton John, Ringo Starr, Paul McCartney, Noel Gallagher, and George Lucas, whose Star Wars soundtracks were partly recorded at Abbey Road.
“Hearing it was the anniversary of Abbey Road Studios brought back so many memories to me,” Mary tells Rolling Stone, in reference to the studio’s 91-year history. “I have grown up visiting Abbey Road, it feels like family to me. In directing this feature-length documentary, it felt natural to explore the wealth of stories, and unearth so many unheard gems that I had not known about.”
Best known for being the creative base of The Beatles, Abbey Road is the oldest purpose-built recording studio in the world.
If These Walls Could Sing also marks the first time the studio is opening its doors for a full-length documentary. Audiences will get a front-row seat to nine decades of memories that tell the stories of some of the studio’s most iconic recordings and the people behind them.
“When you enter a place with so much history around it, it’s kind of sacred in a way,” Elton John says in the trailer. “People want to come here. They want the sound of Abbey Road.”
Watch the trailer for If These Walls Could Sing below.