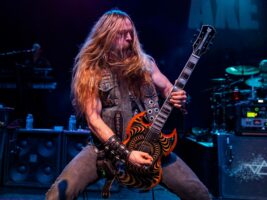 Zakk Wylde’s preparations for his upcoming tour with Pantera apparently involves a teacher you wouldn’t expect.

Speaking to Ola Englund on the latest episode of Sunday With Ola, Wylde revealed that he turned to guitar tutorials on YouTube while learning some of Dimebag Darrel’s more complicated parts.
“Any of these things that I got stumped on, I was, like, ‘What the hell was that?’” Wylde said. “I would just go, ‘How to play’ and I’d go on to YouTube and just see all these other amazing players playing the stuff.”
Some of the Pantera songs he’s been prepping for the upcoming tour include titles like Goddamn Electric, Walk, Cowboys From Hell and A New Level. The guitarist also shared that he will be meeting up with the rest of the band pretty soon, saying “I’ll be hooking up with the fellas. And then we just start going over everything and just probably go over it nice and quiet, until we can start firing it up and just go full volume.”

Earlier this year, metal fans were sent into a frenzy when Pantera announced that surviving members Phil Anselmo and Rex Brown would be reuniting for a tour in 2023.
Anticipation grew when it was confirmed that Black Label Society frontman Zakk Wylde will be filling in for the late Dimebag as Pantera’s new guitarist, with Anthrax drummer Charlie Benante taking the place of Dime’s brother, Vinnie Paul Abbott.
In a recent interview with Guitar World though, Wylde warned that while he intends to stay “as faithful to what Dime did as possible”, fans should not expect a carbon copy of the original guitarist’s style.
“No matter what I do, it’s going to sound like me”, he said. “I can practice all I want and stay as faithful as I want, but I am never going to escape that.”
The Pantera reunion tour kicks off in Mexico early next month. Tickets are available here.
The post Zakk Wylde on using YouTube tutorials to learn Pantera guitar parts appeared first on Guitar.com | All Things Guitar.