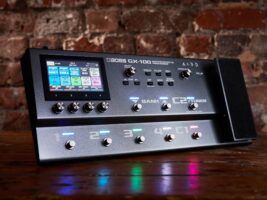 BOSS has launched its latest pedalboard modelling processor, the GX-100, providing a smorgasbord of features for gigging, recording, practising and sonic experimentation.

The unit features a sleek, stepped chassis finished in black, with extensive controls via buttons, rotary knobs and footswitches. The colour display is also a touchscreen, making it easy to edit your digital setup. More tactile control is offered by the four rotary control knobs, while the eight footswitches let you change patches and parameters on the fly. An on-board expression rocker can also be assigned to control basically any digital parameter.
There are 200 slots for user presets onboard the GX-100 with famous names including Jack Gardiner, John Browne (Monuments) and Jay Leonard Jay all contributing their own presets for you to try out yourself. Each preset can consist of up to 15 effect blocks, up to two of which can be selected from a bank of the 23 AIRD amplifiers, the rest from a bank of 150 effects – there are countless entries from BOSS’ pedal catalogue and beyond. Effects can be run in either series or parallel for a huge number of sound combinations. There is also a selection of onboard speaker cabinet IRs, with space to import your own.
The AIRD (Augmented Impulse Response Dynamics) technology was first introduced with BOSS’ GT-1000. As well as accurate amp modelling, it provides a number output options depending on how you’re using the GX-100 – there are modes for running into a full-frequency-range active cabinet, an amplifier input or a front-of-house mixer. The physical I/O includes send and return jacks, meaning you can integrate physical pedals and amplifiers into your GX-100 patches.
Other I/O ports include footswitch control and expression connections, a separate ‘channel switch’ footswitch port, and MIDI in. The USB connector, as well as allowing the GX-100 to receive user IRs, allows you to use the unit as an audio interface, directly transferring digital audio to your DAW of choice. It also enables the use of BOSS’ Tone Studio, which lets you deep-edit your patches, and save and organise sounds.
Hear it in action with BOSS’ official demo video below:

The GX-100 lists for $599.99. Find out more over at boss.info.
The post BOSS takes its floor modellers to the next level with the GX-100 appeared first on Guitar.com | All Things Guitar.