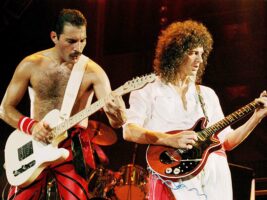 Brian May has spoken about the songwriting talents of his former bandmate in Queen, the legendary Freddie Mercury, reflecting in particular on the “fantastical” lyrics of one song which he believes curtained some of the late frontman’s personal struggles.

READ MORE: Queen to open ‘Platinum Party at the Palace’ concert for the Queen’s Platinum Jubilee

May was speaking with Uncut for its July 2022 edition, in a feature where vocalist Adam Lambert, drummer Roger Taylor and himself looked back at 50 songs from Queen’s career.
Reflecting on In The Lap Of Of The Gods…Revisited from 1974’s Sheer Heart Attack, May recalled the song’s epic quality leading to it frequently being used as a closing number for Queen.
“It’s Freddie being magnificent and being a god, which he was quite good at,” May said of the legendary frontman’s delivery.
May also commented on Mercury’s approach to songwriting, noting that In The Lap Of The Gods… Revisited was a prime example of the late singer’s ability to convey his personal struggles as music.
“In the beginning, a lot of his writing was very fantastical, but underneath, I think he was really pouring his heart out,” May said. “Freddie was struggling with various things at various times, and we all know that his sexuality was quite fluid.”
“It was hard for him to express. And I think you can hear him in this song, struggling with his relationships, putting them into words and music.”

Queen is set to perform at the Platinum Party for the Queen’s Platinum Jubilee on 4 June, 20 years after May performed the Queen’s Golden Jubilee.
The post Brian May on Freddie Mercury’s “fantastical” songwriting: “Underneath, I think he was really pouring his heart out” appeared first on Guitar.com | All Things Guitar.