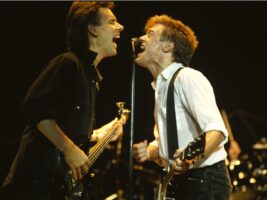 Bryan Adams found success by writing songs for bands like KISS before making it as an artist: “[record labels] didn’t really feel he was a long-term artist”

READ MORE: Producer Ken Scott Calls Steve Morse The “Best Guitarist” He’s Ever Worked With: “He Knew What was Needed”

Speaking during an interview with The Mitch Lafon & Jeremy White Show last Tuesday (June 21), guitarist and longtime collaborator for Bryan Adams, Keith Scott revealed the story behind the musician’s immense success, explaining that the 1984 hit track Run To You was originally written for Blue Öyster Cult.
Scott, who served as Bryan Adams’ guitarist since 1976, spoke about his time working with the musician – stating that his overnight success stemmed from his extensive time working as a songwriter for bands such as KISS.
“He already had a template for the writing style; he was writing for bands like KISS and Blue Öyster Cult,” he states. “Run to You, I believe was given to Blue Öyster Cult, and they rejected it, so we used it.”
In the interview, the guitarist also reveals the story behind how Bryan Adams’ first made his solo debut, stating the musician had to fight to persuade the record company to sign him as an artist.
“At that time, in the early ’80s, MTV had just taken hold. The ramp time for you to get [famous was..] three or four records, and the record company [would] kind of build up your reputation,” Scott explains.
“[It was hard because with A&M Records,] they didn’t really feel he was a long-term artist. […But] his work ethic was off the charts. He understood what it took to keep the whole machine going, that you had to keep pushing, pushing, pushing, pushing, reevaluating what you’re doing.”
In addition to explaining the reasons behind Bryan Adams’ success, the guitarist also describes how he was impacted by the release of Canadian singer-songwriter’s second album, Reckless, which saw great commercial success four years after the release of the debut record.
“I think between 1983, we were able to open up for Journey, who were at the peak of their career at the time and were doing multiple dates in big arenas everywhere across the United States,” he says. “All this extra [exposure] that just kind of came out of the sky, and we just had to ride that wave. By the time the Reckless came out, Bryan [was] smart enough to understand what kind of material it took to get to that next level.”
“[He] had a really good hold of it, [and] understood what it took [to make it big in the industry]. So I think it was a combination of a bunch of elements altogether… hence the rapid rise in popularity.”
Find the full interview with Keith Scott on The Mitch Lafon & Jeremy White Show.
The post Bryan Adams found success by writing songs for bands like KISS before making it as an artist: “[record labels] didn’t really feel he was a long-term artist” appeared first on Guitar.com | All Things Guitar.