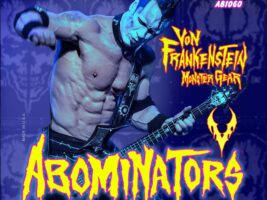 READ MORE: The Genius Of… Walk Among Us By Misfits

Teaming up with long-time industry insider Josh Vittek and his company, Sheptone, the new company intends to provide equipment that enables players to achieve the tone of their dreams, while still durable enough to sustain a vigorous beating on stage.
The unveiling of the brand features the guitarist’s extensive range of guitar strings; each of which comes sporting the bold statement that they are “guaranteed not to break”.
Nickel-plated, each string is said to have been individually made on a US workbench using high-quality, domestically sourced raw materials. In addition, by proudly rejecting mass production, the company also holds the belief that the quality, durability and feel of each string are improved by its meticulous handcrafted method.
“These strings are far superior to anything I’ve used before,” the musician stated after testing the new designs earlier this year. “We went through many different alloys and configurations to find the perfect combination of crushing tone, strength, durability, and most of all…feel. [They] feel so much better. For the first time ever, my hands did not cramp after a show.”
This announcement comes following Doyle’s previous sets of signature guitar strings, The Annihilators, which were released with US Manufacturer Dean Markley back in 2019.
Having worked with the musician for over a decade, Sheptone’s Josh Vittek spoke about the collaboration, explaining why the duo came together to make the company:
“Doyle is the most formidable artist imaginable to collaborate with and launch a new line with right now. He still consistently tours and headlines major music festivals 40 years into his monstrous career,” he insists. “He is global. His influence on other guitarists is immeasurable. He knows exactly what he wants. And most important, the guy is just a great human being all the way around!”
Available now for a limited-edition introductory price, the Von Frankenstein guitar strings come in both the traditional gauges and in three types of sets used personally by the guitarist during his solo tours and his performances with Misfits. What’s more, each set comes featuring a different free vinyl sticker.
More information on the strings can be found on Von Frankenstein Monster Gear’s website.
The post Misfits’ Doyle Wolfgang Von Frankenstein launches new company, Von Frankenstein Monster Gear, unveils own range of guitar strings appeared first on Guitar.com | All Things Guitar.