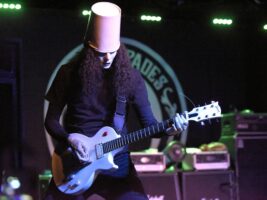 Buckethead has reached out to fans for help recovering his 10 “most important guitars” were stolen.

READ MORE: Rob Halford is “pissed” about Judas Priest’s Rock Hall Of Fame award, says the band “get no respect”

In a statement on his website posted on July 27, the former Guns N’ Roses guitarist wrote that “Ten of the most important guitars of life were stolen,” calling it a tremendous loss. “I’ll never really be able to replace them,” Buckethead continued, “but I’m looking for anybody who knows of any instruments that come close to these. Hopefully, somebody can help out. I’m trying to get 2 Studio Gibson Les Pauls.”
Buckethead has asked that anyone who can help him obtain the Studio Gibson Les Pauls email him at service@bucketheadpikes.com.
NattyNews, a Youtube channel dedicated to Buckethead, has since reported that one of the guitars that were stolen was the guitarist’s 2008 Gibson with a black headstock, revealing that it was sold in a swap meet earlier this year on June 5 alongside a picture of the person who may have stolen the guitars in the first place. The 2008 Gibson has since been purchased by a Buckethead fan who has reached out to the artist to return the guitar.

The prolific Buckethead counts a who’s who of acts among the artists he’s worked with since first donning his iconic KFC bucket headgear after being inspired by the 1988 horror movie Halloween 4. Besides spending four years as the guitarist for Guns N’ Roses from 2000 to 2004, Buckethead has also worked with Bill Laswell, Iggy Pop, Serj Tankian, Viggo Mortensen, Bassnectar and more throughout his career.
He has also released 325 solo albums, alongside four special releases and an EP. Buckethead’s most mainline album release came in the form of his 2017 album Bucketheadland 5-13 10 31, while his most Pike Series album Warm Your Ancestors was released earlier this month on July 9.
The post Buckethead reaches out to fans for help after 10 of his “most important guitars” were stolen appeared first on Guitar.com | All Things Guitar.