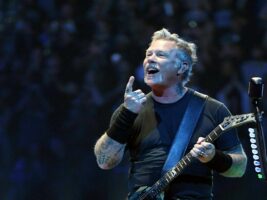 Metallica have finally released a video to accompany their iconic track Master of Puppets, 36 years after the song was released.

The band have unveiled a new lyric video to accompany Master of Puppets, featuring crosses, flying guitars, and of course, puppet strings.
The video was animated by UK design agency ILoveDust, who provided the artwork for Ozzy Osbourne’s upcoming album Patient Number 9 and helped with the promotional work for Foo Fighters’ horror movie Studio 666.

Master of Puppets is currently enjoying a resurgence thanks to the song’s appearance in a pivotal scene from the most recent finale of the Netflix TV series Stranger Things. The epic scene in the Season 4 finale of Stranger Things saw metalhead character Eddie Munson — played by Joseph Quinn — shredding a solo rendition of the band’s 1986 classic Master of Puppets to help his friends defeat the demon Vecna.
The band themselves were elated by the song’s inclusion, calling it an “incredible honour to be such a big part of Eddie’s journey,” adding, “We were all stoked to see the final result and when we did we were totally blown away…It’s so extremely well done, so much so, that some folks were able to guess the song just by seeing a few seconds of Joseph Quinn’s hands in the trailer!! How crazy cool is that?”
Metallica bassist Rob Trujillo also revealed that his son Tye Trujillo, along with bandmate Kirk Hammett, contributed to the version of Master Of Puppets that appears in the series.
“That’s my boy, proud of ya Tye,” wrote Trujillo on Instagram. “‘Stranger Things’ finale shredding it on ‘Master of Puppets’ and big thanks to Kirk Hammett on helping.”
A clip of Quinn jamming to the classic metal song was shared by the show’s writers recently was praised by fans of the band, who were delighted to see the actor playing the riffs with considerable skill. Quinn has said that he learnt to play the guitar growing up, revealing that when he discovered the scene in the script, he rushed out to buy a guitar and start practicing.
“On the day, me and Gaten just got up on top of the camper van, and just got into it. It was very fun,” he reveals, adding a “black belt metal guitarist” did the solo because it was too fast for him.
The post Metallica finally release a music video for Master of Puppets after 36 years appeared first on Guitar.com | All Things Guitar.