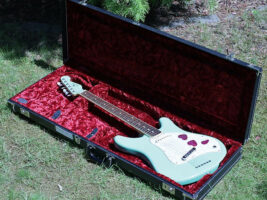 Courtney Love’s Masterbuilt Fender Venus up for sale on Reverb

Courtney Love’s Surf Green Masterbuilt Fender Venus guitar is up for sale, which was one of only three prototypes made back in 1994.

The Venus was designed collaboratively between Love and then-Fender Artist Relations Builder Larry Brooks, who was also responsible for building Kurt Cobain’s Jag-Stangs.
Seven offers have been made since it was added to gear selling website, Reverb, and there are currently 200 watchers on the item as we write this. It’s described as used but in excellent condition by seller Guitarsmith, and once resided with Love at her shared Lake Washington home with Cobain.
It was used for iconic Hole performances such as the 1994 Lollapalooza tour, the MTV Video Music Awards in 1995 and Reading Festival also in ‘95. The seller notes it doesn’t have a volume or tone knob at Love’s request, which she left out to prevent things from being knocked out of position when putting on live gigs.

It currently hosts a Schaller Bridge and the original Japanese made tune-o-matic style bridge. It also features creamy white binding around the neck inspired by mid to late ’60’s Jazzmasters and Jaguars, and is embezzled with red, glittering hearts on the pick-guard.
Love and Bonnie Raitt were the first two women to have fully custom guitars built for them from the custom shop, builder Brooks said of the model (according to the seller), “I designed this ballsy-toned guitar to include many custom aspects, like the bound custom shaped neck, matching painted headstock, absence of a volume knob, custom shape pick-guard, custom body shape, and strings that flare over the tune-o-matic bridge through the body.”
And Love isn’t the only iconic rock artist to recently sell their used gear on Reverb, just last week Nancy Wilson of Heart announced she would be selling on a multitude of her used gear including the Gibson SG used to play hit song Barracuda.
The Fender Venus currently sits at a pricing of £54,467.84, you can check it out on Reverb.com.
The post Courtney Love’s Masterbuilt Fender Venus up for sale on Reverb appeared first on Guitar.com | All Things Guitar.