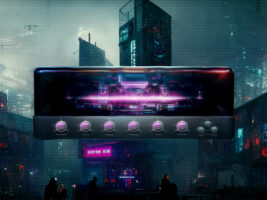 Positive Grid has announced the launch of OMNYSS, a collection of amps and effects voiced for “sonic disruption”.

READ MORE: Noel Gallagher says “extraordinary set of circumstances” needed to reunite Oasis: “It would be a circus, and there’s no point”

OMNYSS is powered by the BIAS FX 2 software platform and is driven by a new DSP engine. It offers six effects and three all-new amplifiers, accompanied by a range of classic and boutique microphones on offer too, as well as three dynamically modelled cabinet IRs.
The amps available are Etheria for a futuristic, clean tone, Aggralith which is a modern high-gain and Viscerus for those after something with a more heavy attack.

Effects wise, here is what you can expect:

Those who already use BIAS FX 2 can add OMNYSS to their amps and effects library, but it can also be used as a standalone software or a plugin for any major DAW.
In October last year, Positive Grid launched an Authentic Hendrix pack for BIAS FX 2 which offered players an arsenal of amps, pedals and guitars, each modelled on Jimi Hendrix’s gear.
Since then, it launched the Spark Mini practice amp back in August 2022 which earned a respected 9/10 from us at Guitar.com for its great sound despite its tiny size, and easy use for both bedroom jammers and experienced guitarists.
OMNYSS is compatible with Mac, PC and iOS for $99 USD (PC/Mac) and $19.99 (iOS). Find out more at positivegrid.com.
The post Positive Grid launches OMNYSS amp and effects collection appeared first on Guitar.com | All Things Guitar.