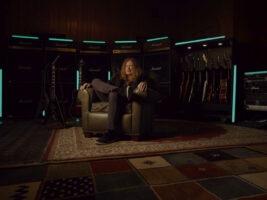 Dave Mustaine has appeared on Gibson TV’s Icons interview series for an hour-long discussion of his musical journey, all the way from childhood to now.

Across the interview, Mustaine discusses how he first got into music, outlining the artists his older siblings were listening to, as well as his early experiences with guitar music.
Mustaine also candidly discusses his time in Metallica, revealing how he feels that he was destined to leave Metallica, remembering how his and the rest of the band’s personalities – on and off the stage – clashed. He also revealed that he saw his jealousy of Metallica’s success as equally inevitable. “It could have been anything,” he said. “They could have quit metal and started making Twinkies, and I would have been jealous. Because, we were friends. And all of a sudden we’re not friends anymore.”
“I’m glad to say that our friendship today is so much different from those moments… we’re all different, we’re dads, we’re older now.”
Gibson’s brand president, Cesar Gueikian, said of the show: “Dave’s Icons interview takes an intimate look into his incredible career highs and lows, showing how strong he is and everything he has done to keep Megadeth moving forward. The interview also reveals a heartfelt and vulnerable side of Dave that people have never seen before, and it’s truly inspiring how he’s transcended his own personal struggles. Gibson is beyond honored to work with Dave Mustaine and bring his creative vision to life.”
Take a look at the episode below.

Mustaine joined Gibson in February of 2021, leaving Dean to join the brand. Alongside the announcement, the brand revealed a number of new signature models for him – with several different Flying V guitars, and one acoustic announced so far.
The post Dave Mustaine talks Metallica, Megadeth and inspiration in Gibson TV: Icons interview appeared first on Guitar.com | All Things Guitar.