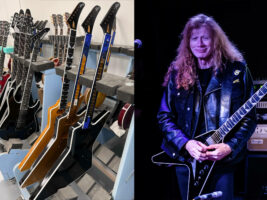 Dave Mustaine has given fans a sneak preview of his upcoming Gibson Explorer signature range in a recent social media post – what caught the attention of eagle-eyed fans however, was what looks to be a USA-built Kramer in the background.

“The third horseman. My ‘Dave Mustaine 24 fret Gibson Explorer.’ One more to go,” wrote the Megadeth mastermind in his Instagram post on Saturday (12 November). It seems these will launch in three finishes, Black, Gold Top and natural.
The Four Horsemen reference likely alludes to the previous Gibson artist models launched for Mustaine over 2022; there was of course his Gibson Flying V, then a Gibson acoustic, and now this Explorer model – so what’s the fourth?
Back in February, it was revealed that Mustaine would also be getting signature models from Kramer and Epiphone, though there hasn’t been any such product launches from those Gibson divisions yet.
Referring again to Mustaine’s Instagram post, there was a guitar in the rack next to the Explorers’ that caught the eyes of fans: what appears to be a US-made Kramer with diamond inlays and a sleek black finish.

The Kramer could well be a custom guitar made for Mustaine and not for public release, but given the expectations Gibson set for the launch of signature Kramers and Epiphones, it’s not far-fetched to think it could be an early prototype.
More on this as we know it.
In other Gibson news, last week (8 November) a judge denied Gibson’s motion to find Armadillo, the parent company of Dean, in contempt of court. The development follows a landmark court win for Gibson in May, in which a jury found Dean guilty of infringing and counterfeiting Gibson’s trademark body shapes. In Gibson’s more recently filed emergency motion, the brand argued that Dean failed to comply with the court order by continuing to advertise its infringing guitars such as the V and Z.
The post Dave Mustaine teases new Gibson Explorer and US-made Kramer appeared first on Guitar.com | All Things Guitar.