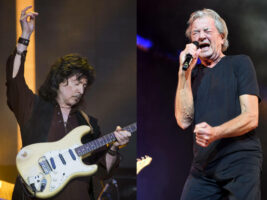 Ian Gillan: A “grand reunion” with Ritchie Blackmore would be utterly disrespectful to Deep Purple

Ian Gillan has – once again – shut down the possibility of a Deep Purple reunion with founding guitarist Ritchie Blackmore because there’s apparently “no love there”.

READ MORE: Ritchie Blackmore says Deep Purple’s music was “a bit monophonic” during his final days in the band

The singer recently appeared on the Spanish radio station RockFM, where he addressed his relationship with Blackmore over the years and why the idea of a reunion with the man remains out of the question.
Describing Deep Purple’s dynamic as like a “family” in the beginning, Gillan notes that something had changed when the band got back together for Perfect Strangers in 1984 and that “the human chemistry wasn’t quite the same”.
“So, it became difficult. And in the end, there was this antagonism,” Gillan explains. “I got fired from the band because I wanted to do more touring and Ritchie wanted to do less. We had a meeting one day, and I said, ‘Why don’t we go to South America, Russia, all over the world, we’re a live band,’ and the next day Ritchie went to the management, and said, ‘Well, it’s either him or me.’ So, they chose him, and that was fine.”
“And they made a record with another singer [1990’s Slaves and Masters with Joe Lynn Turner], and the record label said, ‘Either you get Ian back in the band, or we’re tearing up the contract. So, I went back to Deep Purple, and Ritchie went crazy; he didn’t like it. So, eventually, he walked out.”
He continues, “Because we are a family, we think it was like a divorce — he walked out, and he’s gone. But he wanted to keep control of the band after having walked out. And he’s been a pain in the ass ever since.”
Gillan also mentions that though the band is “getting along much better” with Blackmore these days, a “grand reunion” with him would result in a “terrible” atmosphere, with the whole affair being a cash grab and nothing more.
“We think his manager has got a lot to do with the problem that exists. It’s one of those things that you cope with,” he says.
“And I think the idea of a grand reunion would be utterly disrespectful to the living, breathing Deep Purple. The atmosphere would be terrible, it would be artificial — it would be only for money, nothing else. ‘Cause there’s no love there, there’s no affinity. Twenty-five percent of the essence of Deep Purple is improvisation, and we’ve got a musician now that’s absolutely unbelievable.”
“And I don’t know how much Ritchie has been practicing… I could go on for a long time, but the simple answer is, ‘No’. It’s the ex-wife, we do not want to get back together again.”
The post Ian Gillan: A “grand reunion” with Ritchie Blackmore would be utterly disrespectful to Deep Purple appeared first on Guitar.com | All Things Guitar.