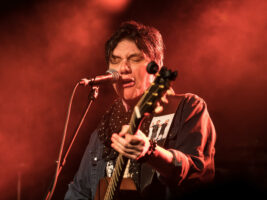 Mr. Big frontman Eric Martin recently hinted at some “big things” to come, sparking speculations that a comeback from the rock band is on the horizon.

Asked if there are any plans for Mr. Big to reunite, Martin told Chile’s Radio Futuro, “If you asked Paul [Gilbert, Mr. Big guitarist], he’d go, ‘Oh, well. I don’t know. Never say never.’ And same thing, Billy [Sheehan, Mr. Big bassist] would go, ‘Well, you know, it would be a good idea.’ But I’m here to tell you that there is a rumour. Did I start this rumour? I don’t know.” (via Blabbermouth)
“I believe that there are big things coming. I keep saying that, and I want people to believe me that we’re not down for the count. It’s not over. I think we’ve got some things to do,” he said.
The singer explained that though the band has been on indefinite hiatus since the death of original drummer Pat Torpey in 2018, he still gets requests from fans all the time to play Mr. Big songs.
“I miss Mr. Big; I really do,” Martin said. “I’ve been waiting for Mr. Big to maybe do something for the last four or five years now, since Pat Torpey passed away. And even though I’ve been doing it for years and years, incorporating Mr. Big songs in my set and playing my solo stuff, I like playing the songs of Mr. Big.”
“The band, we’ve been on kind of a permanent hiatus for the last four years — four or five years — and I miss playing Mr. Big songs. People ask me to play solo stuff all the time, but the majority of people love the songs of Mr. Big — from the hard, fast rockers to those little spluffy, warm and fuzzy ballads.”
“They love it. So I give the people what they want.”

This is the second time in recent months that a member of Mr. Big has mentioned the possibility of a reunion. Back in August, bassist Sheehan said that Mr. Big was “strongly considering” playing together again in 2023, though “nothing’s for certain” at that point.
The post Mr. Big comeback in the works? Eric Martin hints at “big things” to come appeared first on Guitar.com | All Things Guitar.