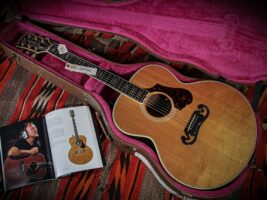 A 1985 Gibson J-200 Celebrity that once belonged to Pink Floyd‘s David Gilmour has appeared for sale on Reverb.com.

READ MORE: David Gilmour is writing a new album: “The electric guitar I’m currently playing is not as ‘rock god’ as one might expect”

The guitar’s lineage doesn’t just extend to Gilmour however – the Dire Straits’ John Illsley originally owned it before being purchased by Gilmour in 1994 to use on The Division Bell tour. Much of Gilmour’s guitar collection was sold off in a 2019 charity auction, including this J-200.
The guitar is priced at $325,500 on Reverb.com, not including a $300 shipping fee.
Only 400 of the 1985 Gibson J-200 Celebrity acoustics were made, and this particular guitar is numbered 42 among the collection. Composed of a rosewood back and sides, an ebony fingerboard, mahogany neck, a moustache bridge with vintage inlays, and vintage deluxe Allison tuners, the guitar’s headstock also features the retro ‘The Gibson’ inlay.
Gilmour was a clear fan of this model as he owned two, notably playing them at the famous Live 8 concert that reunited Pink Floyd in 2005 as well as in the studio.
The buyer may even receive a visit from Gilmour in the future, considering the guitarist was heartbroken to part with some of his collection. He told Forbes in 2019, “it will be a wrench to see them go and perhaps one day I’ll have to track one or two of them down and buy them back!”
Gilmour has recently spoke out on a potential return to live music in an interview about Pink Floyd’s charity single, Hey Hey Rise Up. “We haven’t even thought about doing live shows, but I suppose it’s a possibility,” he stated. “I haven’t done one in such a long time, but who knows – I don’t know.”
Pink Floyd’s last tour was way back in 1994 in support of their record, The Division Bell. Gilmour was more dismissive of the chances of a reunion last year when he said that any return to live shows for the band would be “fakery” and confessed the band were broken up  for good stating, “I’m done with it.”
The post David Gilmour’s 1985 Gibson J-200 is now up for sale online appeared first on Guitar.com | All Things Guitar.