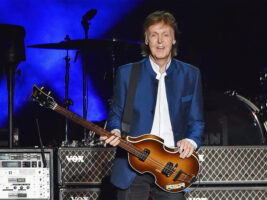 At a few of his recent concerts, Paul McCartney has been ‘performing’ with John Lennon, with footage of the late Beatle cast onto the big screen. Some sources online claim McCartney has plans to take the ‘virtual duet’ to Glastonbury next week.

READ MORE: Paul McCartney’s brother on how their mother’s death inspired their creative pursuits: “Both of us lost ourselves to art”

A moving tribute to John Lennon is said to be part of McCartney’s Glastonbury set on Saturday, 25 June, according to the Daily Mail. The closing performance of the Pyramid stage that day was also said to include the appearance of the Ukrainian flag.
A friend of the star reportedly said: “He is tinkering around with the set list but it looks like he will do a virtual duet with John Lennon.”
Fan-uploaded footage of McCartney performing I’ve Got A Feeling off Let It Be with Lennon’s isolated vocals at his concerts has surfaced online over the last few months, offering a preview of what the tribute might be like.
Watch footage from Scott Crawford below:

The Daily Mail’s source further claims that McCartney may ‘well be moved” to include Lennon’s Give Peace A Chance to his setlist.
Paul McCartney turned 80 years old on Saturday (18 June) with most of the music world, from Ringo Starr to Jon Bon Jovi, paying tribute online.
The post Paul McCartney to ‘virtual duet’ with John Lennon at Glastonbury, says sources appeared first on Guitar.com | All Things Guitar.