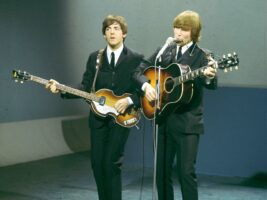 Paul McCartney at 80: The guitar world celebrates with tributes online

The Beatles icon Paul McCartney turned 80 on Saturday (18 June), and the guitar world has chimed in to pay tribute to the Liverpool-born artist.

McCartney’s long and storied career has spanned nearly all of his eight decades on Earth, joining The Beatles in 1961 after the departure of founding bassist Stuart Sutcliffe and soon becoming frontman John Lennon’s writing partner. The duo created magic with their early singles like I Saw Her Standing There, She Loves You and I Want to Hold Your Hand, establishing The Beatles as the pre-eminent band worldwide.
McCartney would leave The Beatles in 1970 and formed the group Wings with ex-Moody Blues guitarist Denny Laine, Denny Seiwell, Henry McCullough and his wife Linda. Wings became a success, releasing seven platinum-selling LPs before McCartney felt it was time for a new challenge and left the band in 1980.
He became a successful solo artist in his own right, famously lending his talents to Michael Jackson’s The Girl Is Mine from Thriller and Stevie Wonder’s Ebony & Ivory while releasing hits like the James Bond theme song Live & Let Die and Pipe Of Peace.
See the tributes below:
Sean Lennon
The son of John Lennon and Yoko Ono posted a short snippet of himself playing McCartney’s favourite Beatles tune, Here, There & Everywhere. “This version is a bit rough because it’s such a pretty song I kept getting choked up and staring again!,” Lennon wrote, thanking McCartney for the “beautiful music”.

Yoko Ono
McCartney’s relationship with Ono may not have been on the best of terms at all times, with the guitarist admitting to his struggles as recently as last year’s Hulu documentary series entitled McCartney 3, 2, 1. Nonetheless, Ono still sent McCartney a sweet birthday wish.

Ringo Star
Ringo wished his Beatle brother a happy birthday in a message through Twitter containing a lot of love.

Elvis Costello
Elvis Costello opted to pay tribute to McCartney with a rendition of Here, There & Everywhere as well, shot in his home studio. Costello also sent greetings from his The Imposters bandmates Diana, Dexter, Frank, Pete, Steve, Davey, Charlie and Sebastian.

Billy Joel
Billy Joel opted for a short and sweet walk down memory lane with a series of pictures from the times he shared the stage with McCartney.

Ronnie Wood
Ronnie Wood of the Rolling Stones wished McCartney a happy birthday, sharing some photographs of the two over the years.

The post Paul McCartney at 80: The guitar world celebrates with tributes online appeared first on Guitar.com | All Things Guitar.