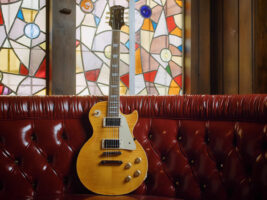 The original guitar was, according to Bonamassa, brought to him by LA luthier David Neely as he was eating meatballs at Barone’s in Hollywood. It was apparently in a sorry state and had been refinished in red – however, Bonamassa had a sneaking suspicion that beneath the wear and the refinish was a holy grail – a 1959 Les Paul Standard.
Bonamassa told us about the guitar’s condition last year: “At that point [Neely] had stripped all the parts off and put it in a box, and he said, ‘The guy wants it restored, but he only wants to give me like a thousand dollars!’ So I took a look at this guitar, and at this point, it was still red – and when I say they’d painted it red, I mean they’d painted it red. They’d even painted over the binding! Everything was red except the holly veneer on the headstock, in the cavities and in the back cavity – and thank goodness!”
His suspicion was confirmed when he took it to Neely’s workshop: “he pulls the box of parts and it’s two PAFs, two real M69s [pickup rings], all the tuners, the truss rod cover, the nickel hardware, the knobs, and I like it all. Then I take a look at the pots, and it’s the original harness, dated to the seventh week of 1959… and so I’m like, ‘Well if it walks like a duck and quacks like a duck, guess what it is?!’”
To earn the guitar its biblical name, Bonamassa then embarked on restoring it to its original glory, after purchasing it from its owner. It was refinished, and had its parts and body reunited.
The Epiphone recreation features a one-piece mahogany neck, a mahogany body with a maple cap and a wide-grain AAAA flame maple veneer. This premium flame maple pays tribute to the, as Bonamassa put it us, “monster fucking [maple] top,” that was hiding undeneath the thick red paint.
The guitar’s pickups consist of a Gibson BurstBucker 2 in the neck and a BurstBucker 3 in the bridge. The neck profile also takes after Lazarus’, which is the same C-shape as most ‘59s but on the smaller end of the scale.
See Bonamassa play and discuss both the Epiphone recreation and the original Lazarus below.